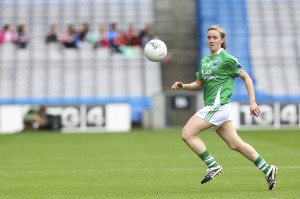 Shauna Hamilton chases down a ball against Down

For Shauna Hamilton the overriding feeling on Monday evening was one of disbelief. The Devenish player simply could not put her finger on what had went wrong just over 24 hours earlier at Croke Park when she was part of a Fermanagh team that fell to a 21 point loss at the hands of Down in the All-Ireland Intermediate final.

“I just don’t know what to say. Just don’t know where it went wrong and why absolutely nothing happened for us. We just did not turn up and it is very hard to figure out why that happened.”

The Mourne girls set off at a breakneck speed and Hamilton revealed that this did not come as any surprise to the Erne ladies.

“We knew that they liked to start very fast and in their last few games they have done that so we knew what to expect but we were just not able to stop them and worse than that we were not able to get anything going ourselves.”

Just before the half time whistle Fermanagh conceded a penalty which Down dispatched to put nine between the teams and effectively kill the tie.

“Their penalty was a real killer blow. We had been on the attack and had a chance to create a real good goal chance but we did not take it and they came back down the field and got the penalty and it was a real turning point in the game,” Hamilton explained, although she was quick to point out that regardless of that penalty Fermanagh were beaten by much the better team.

“They were far superior to us on the day. All over the pitch they were better and they deserved the win. We just had a day where one to 15 we did not turn up.”

Hamilton is one of an experienced group of players on this Fermanagh team and although Sunday was the second All-Ireland final defeat that she has suffered she spoke of her hope that the core group of players would pick themselves up again.

“It is very difficult to think about the future now. What we are feeling now is hurt and disappointment. But we have a young panel and a lot of good young players coming through and I don’t think we would want to leave our last performance in a green jersey to be that game against Down.

“We have show a lot of heart and determination this year to come back from a poor league campaign and hopefully we can pick things up and get going again.”