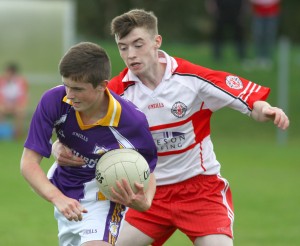 Derrygonnelly booked their place in the county final with an accomplished display against a youthful St Patrick’s outfit in Kinawley last Saturday.

“It was a good hard hitting game from the very start, but Derrygonnelly were a very strong side with very little in the way of weaknesses,” said St Patrick’s manager Niall Freeman.

Indeed Donagh had their keeper Niall Curran to thank for keeping his side in the game.

As Derrygonnelly manager Anthony Greene pointed out, the problem for Donagh was picking off their scores despite getting some decent possession in the first half.

By contrast the Harps found their scores much easier to come by, all but one second half placed ball coming from play.

After taking time to get going in the first half, Derrygonnelly upped it in the second and Greene was pleased with his side’s performance in that period.

Jack Love excelled at corner forward and thwarted the best efforts of the St Pat’s management to stem his influence. Also prominent in a polished Derrygonnelly performance were Conor Cameron, Aaron McGloin and Shane McGullion.

The Harps victory sets up a county final meeting with Enniskillen Gaels. It’s one that many would have predicted at the start of the championship and it has come to pass.

Derrygonnelly accounted for the Gaels in both league games, But Greene isn’t putting excessive credence in those results.

“They have a lot of skill throughout their team and then there’s strength in the central positions. They know us very well,” said Greene.

“County final day will be a new thing for our boys, but some of the Enniskillen players would have been involved in the county final last year which would be an advantage to them. It’s five years since we’ve been there, but we’ll be going there well prepared.”