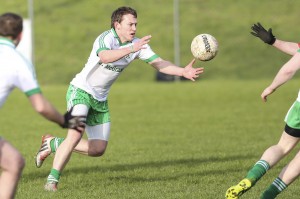 So far so good for champions Roslea as they have, without any undue hassle, hurdled their opening defences of their crown, two relatively straightforward wins chalked up over Lisnaskea and Belcoo.

But in semi-final opponents Ederney the Shamrocks will be taking on their toughest test of the campaign so far.

Ederney captured the league title last season after many years faltering on the doorstep of a senior breakthrough. They have been buoyed by that triumph and rightly regard it as the stepping stone to greater things.

No question about it but this Ederney side have set their sights on the championship as the one and only target for 2014. They will come into this game in an utterly determined frame of mind and Roslea can anticipate a fiery battle.

But will Ederney’s sheer determination be sufficient to score them the victory that they crave?

“Well we know that we are up against it,” was the candid response of manager Iggy Gallagher.

“In Roslea we are taking on a team who but for a blip a few seasons back would be going for five in a row. So if we are to win this it will take a really big performance from everyone on our side.”

Last season Ederney, after they had turfed out the then reigning holders Tempo, failed to drive on from that and they were well mastered by Roslea in the semi-final.

“Obviously we will want to show considerable improvement on that and there are things which we can build on,” said Gallagher.

But in the end it all you can hope for as a manager is that we play to the best of our ability on the day.”

Roslea come into the game in the by now familiar role as favourites and they have always been able to handle that particular situation.

“We approach every game the same, regardless of who the opposition is”, commented Peter Lynch one of the side’s most experienced players.

“In any case this is an Ederney side who invariably cause us problems and they have beaten us on several occasions over recent years.

“They are a team with lots of pace and they have a number of current county panellists featuring.  A well set up team. Plus the fact that they won last season’s league, no mean feat, and they will want to use that as a springboard for a championship bid.

“We ourselves won a league some seasons back and that gave us belief for the following year.”

Ederney however do have a massive challenge ahead of them if they are to take another step towards winning their first senior crown since 1968.

They will know exactly what they simply have to do if they are to topple the holders.

Defensively they have to corral the potent Roslea scoring juggernaut spearheaded by Seamus and Sean Quigley.

That juggernaut of course will be stalled if supply isn’t forthcoming so Ederney, who don’t look all that secure in defence, have to gain a commanding grip around the centre of the park.

Here huge return has to come from Martin McGrath, but he will also need rock solid back up from half backs Aaron Dennison, John Irvine and from Declan McCusker in the half forward line.

Up front Paul McCusker has emerged as one of the most exciting corner forwards on the club scene and he can keep the Roslea defence occupied.

But Roslea are a very organised outfit back in defence, they have a side laced with experienced and proven personnel and have the topping of the most prolific strike force in the county.

Ederney will bring exceptional effort and drive to this game, but it will take an exceptional performance from them to give Roslea the heave.
The holders have to be regarded as the side to move on.