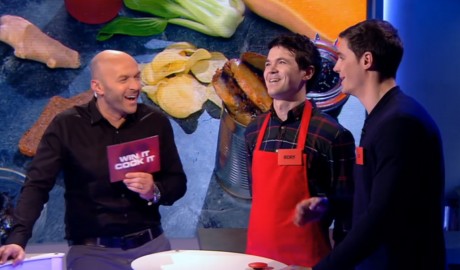 ‘WIN IT COOK IT’… Rory Ferguson, centre, on the Channel 4 show

A LOCAL solicitor was a contestant on a cookery show with a difference last week, as he threw his chef’s hat into the ring on ‘Win it Cook it’.

Rory Ferguson (28) from Enniskillen, now working in Liverpool, was one of the first contestants to appear on the new Channel 4 show where two teams answer questions to win good or bad ingredients to use in a dish that they hope will impress host Simon Rimmer and his guest judge.

Rory and his friend Joe Limb took part in the show, which aired on Tuesday August 5.

On the show Joe answered the questions while Rory waited in the kitchen for his ingredients. The main ingredient was duck breast and when Joe lost out in the quiz battle Rory was left to create a culinary masterpiece with pilchards.

The two created a dish entitled ‘Pilchard pate and friends’, which consisted of pilchard pate, rye bread, a rhubarb and ginger sauce to accompany it and a butternut squash and pak choi stirfry with poached egg on top.

Guest judge Paul Rankin was impressed and commented that Rory had a ‘nice way about him in the kitchen’, but ultimately ruled in favour of the more traditional duck dish.

Rory has no regrets about his TV appearance, but revealed there were a few problems during filming.

“They had to put makeup on us because it was TV and had these really hot lights on us and had to keep stopping filming. I think they stopped five or six times because I was sweating profusely. They kept saying can you please stop sweating Rory and would have to cut so the makeup woman could come on and dab me down and re-apply makeup, so that was quite funny.”

He continued: “I felt Mr Rankin kind of betrayed his countryman with his decision, but as soon as we didn’t get the duck it definitely made my task a little more difficult. I had never used that ingredient before and you got about 10 minutes to decide what you were going to cook and 20 minutes to cook it and you had to use every single ingredient, so really it was quite pressurised at that stage to know what to do.

“I don’t think the pilchards were the best ingredient in any event, but with a bit more time I probably wouldn’t have gone for the poached egg on top of the stirfry and maybe would have made a desert with the ginger and rhubarb, but you know it’s easy for everyone to say that’s what they would have done, particularly my brother Ewan.

“I don’t pretend to be anything particularly special in the kitchen, but it was a bit of fun and people have had a good laugh at my expense, particularly my family. They thought some of the combinations were a bit random, but as usual they weren’t putting forward any constructive criticism, it was just criticism. It was in good spirits though.”