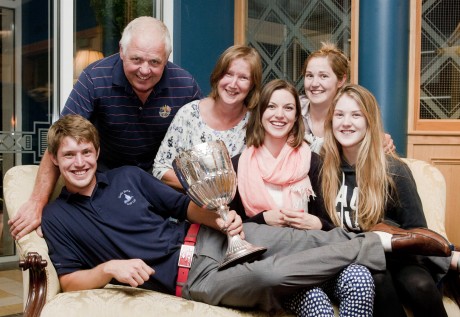 The tournament, played over consecutive days at Enniskillen and Castle Hume attracted some of the best golfers in the county, with 28-year-old Richard coming out on top with an overall score of +1.

Richard the four handicapper played out a impressive level par round at Enniskillen before a one over at Castle Hume to secure his first victory in the tournament.

The gross scores of 40 and 39 gave Richard an overall points tally of 79 and his first victory in a tournament for seven years.

Speaking about the round Richard admitted his game came together well, but conceded he got a bit of luck along the way.

“I chipped and putted very well, I got away with a lot of bad shots and got a bit of luck, but overall I didn’t play badly, I did play well.”

“I knew Mark’s score before I went out and in the back of my mind I thought that’s probably looking  to be the top score,” explained Richard, “so my goal was to get to that total before I finished.”

Richard was able to reach that score and despite bogeying the final two holes was able to come away with an illustrious ‘Fermanagh major’.

“I haven’t won a competition for maybe six or seven years so it is very pleasing for myself to win one of the Fermanagh majors. It is my first win in a long time and I’m very happy.”

Other strong performances over the two days came from Mark Gilmurray who finished fourth on 76 points and both David Lunny (75 points) and Barry McCauley (74 points), who finished fifth and sixth respectively.

There were 16 prizes handed out during the prize giving evening which was held at Castlehume golf club. Mr Richard Heap Castlehume club captain welcomed everyone to the prize giving and thanked everybody for all the hard work which made the competition a success once again.