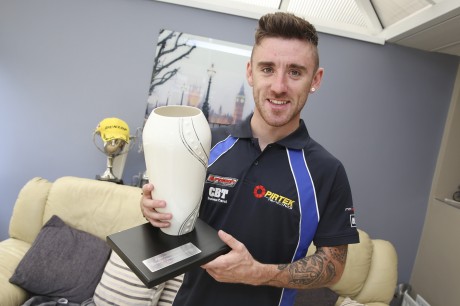 Lee Johnston, winner of the May 2014 Fermanagh Herald Sports Personailty of the Year award

After the best month of his career in which he won two International races at the North-West 200, Lee Johnston is the Fermanagh Herald Sports Personality of the Month for May.

The Maguiresbridge motorcycle rider had a North West to remember winning two Supertwin races at the world renowned racing event.

Lee, who had previously secured top three finishes at the North-Coast event, went one better in 2014, adding to his growing reputation by taking two race wins; one in the Vauxhall Supertwin and the other in the Anchor Complex Supertwin.

“It is probably the best result of my career, they were my first two international wins so it has to be,” explained the Pirtek Honda rider. “It was a good event, even though I had a crash in the super sport race which I was leading. That was a bit of a blow and I was bit upset about that, but I got over that and managed to pick up the two wins.”
Lee described crossing the finish line in first position as a ‘great feeling’, meaning that little bit more coming in one of his home events.

“We only race at home twice a year and it was my first race at home of the season. To win it was an awesome feeling, especially with my family and friends there, it made it extra special.”

At present Lee, who lives in Hull, is preparing for the Ulster Grandprix in two weeks time and hopes to add to the titles secured at the North West.

Lee’s career takes him across the globe, including visits to Belgium, Assen in Holland and Macau, where he finishes the season in November. In a rare visit home at the weekend for a wedding Lee was delighted to receive his Herald monthly award.

“My mother’s over the moon, she’s got another piece of Belleek at home she can clean,” he joked.

“It’s lovely, I’m really pleased and it is an excuse to get home at the end of the year for the awards dinner.”