Advertisement
HomeHeadlineHub of Donagh community back in action by Christmas
Advertisement 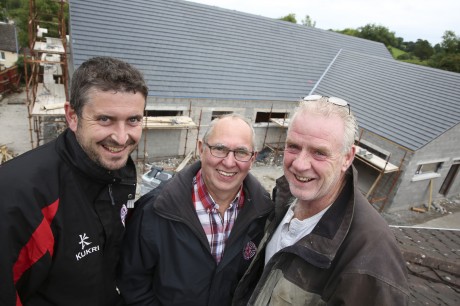 Ferghal Wray, Chairman and Clearer of tiles, Cathal Reihill, PRO and Clearing out of old sealing and Joey Maguire, Vice Chairman and Plasterer

WORK continues on the rebuilding of Donagh’s clubhouse after a fire that virtually wiped out the hall over a year ago.

St Patrick’s GFC clubhouse had served as the hub of the community for 27 years – until a fire caused by a boiler back on Easter Tuesday night in 2013 – resulted in severe damage to the building.

The community has rallied together, however, and fund-raising – which includes a big money draw being made next week – has allowed for the redevelopment of the hall.

Included in the redevelopment is a new smaller bar – which club secretary Mary Sweeney said will add real value to the clubhouse.

When it returns, the committee hopes that it will return to its previous ‘hub’ status within the community.

Mary explained: “At the minute a fair bit of the building is done – the roof is now on the building and we’re making decisions on the interior and the exterior.”

The Millennium Hall in the area has been used in the meantime – which the club are thankful for – but Mary added that everyone is looking forward to having the clubhouse back up and running before Christmas time.

“It’s going to be able to cater for bigger events and the smaller bar will help with others.

“It probably will be as popular as before, I know that everyone is waiting patiently on it to finish.

“The community has to be thanked – with us doing the draw the people in the community have been so good. It’s been no bother to people.”