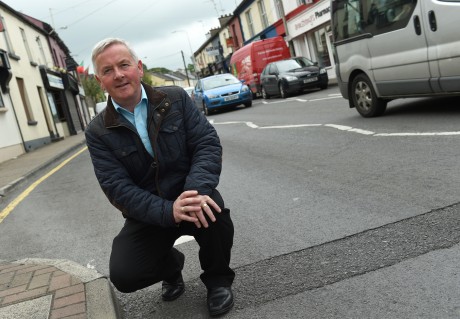 In 2013, beginning in August, a £220, 000 investment into the road and footpaths, was met with a mixed response from locals – with traffic delays and losses to business of major concern.

But, there is little doubt in the aesthetic and functional improvement that the refurbishment made.

The works involved resurfacing the carriageway along with drainage and footway improvements from the roundabout at Drumhaw to the mini-roundabout at the junction with B127 Water Street/Castle Lane.

And, this week, newly elected SDLP Councillor, Richie McPhillips, who owns a business in the town, expressed hope that the second half of the road would receive a boost in the near future.

“When the previous was done, businesses especially up the other end of the town would have thought that it should have been extended from one end to the other,” Councillor McPhillips explained.

“That hasn’t happened yet and like everything else it’s down to financial implications and you would hope that it’d be taking place for the other end of the town in the future.”

The councillor said that while the roadworks did cause a headache for locals and business people, the town is now ‘reaping the benefits’ one year on.

“It was in bad  need of being upgraded and it had been on the cards for quite some time. I suppose there was quite a bit of noise for businesses. It was tough at the time, but businesses are reaping the benefits now.

“A lot should have been learned. It’s a painstaking exercise – I was speaking to the contractor at the time and the shop owners at the time.

“It was a tough thing to get across  and with projects like it, especially on the main thoroughfare, it’s hard to get by it without some pain. But you would hope there would be lessons learned from last time.”

A spokesman from road service said: “While it is hoped to resurface a further section of Lisnaskea Main Street at some stage there are no current plans for the work to commence.”