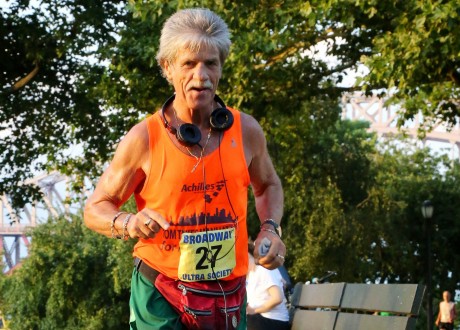 EDERNEY born long distance runner, and former Fermanagh footballer Tom McGrath is back in Ireland this week to undertake two challenges for charity.

Within the next two weeks Tom will be undertaking a gruelling 24 hour run in Dublin and completing a 10k in his native Fermanagh.

Now living in Manhattan, New York, Tom arrived in Ireland on Monday to prepare for his latest challenge – a 24 hour run beginning at 11am on Saturday, August 30 and ending at 11am on Sunday, August 31 – a run to raise awareness and money for Irish Heart Foundation.

At around 3pm on Sunday, Tom will enter Croke Park stadium just before the Dublin vs Donegal All-Ireland football semi-final accompanied by two children who suffer from heart problems.

The promotional video is for the upcoming film ‘Lazarus Running’, a film about the life of the man from Ederney who moved to America back in 1972 and who has undertaken many huge charity runs including one which saw him run right across the United States.

On Friday, September 5, Tom will undertake his ‘home run’ when he runs 10K from Irvinestown to Ederney finishing at the Glendarragh Valley Inn where a function in his honour will be held.

The run to Ederney will start at St Mary’s College in Irvinestown at 5.30pm and Tom is inviting anyone who would like to join him to come along – and bring their running shoes.

Joining Tom on this ‘home run’ will be his cousin Gerry McGrath, who will also travel to Dublin and take part in some of the 24 run with Tom.

This run is for Cuan Mhuire, the centre for treatment of people with addictions such as alcohol.

Tom McGrath admits he is a recovering alcoholic and Tom is running to raise funds for two worthy causes Cuan Mhuire addiction centre and the Irish Heart Foundation.

“Running saved my life’, Tom admits and he is hoping to raise as much money for Cuan Mhuire and for the Irish Heart Foundation, who are to benefit from his gruelling 24 run which will begin on Saturday in Santry in Dublin.

Tom said his first long run was from Athy to Dublin in December 1977 and this was for Sister Consilio’s rehabilitation centre known better as Cuan Mhuire.

Throughout his time in Ireland a film crew will be following Tom taking footage for ‘Lazarus Running’ and maybe getting the final scenes of his life story as the man from Ederney returns home once more.

The whole event is a great honour and privilege and will be a beautiful last scene for “Lazarus Running” along with our “Own Ederney” – can’t forget our “Roots” said Tom.

“We will be shooting film all the time we are there. I will shoot in Donegal on Thursday – alot of work but it will make the movie No. 1.”