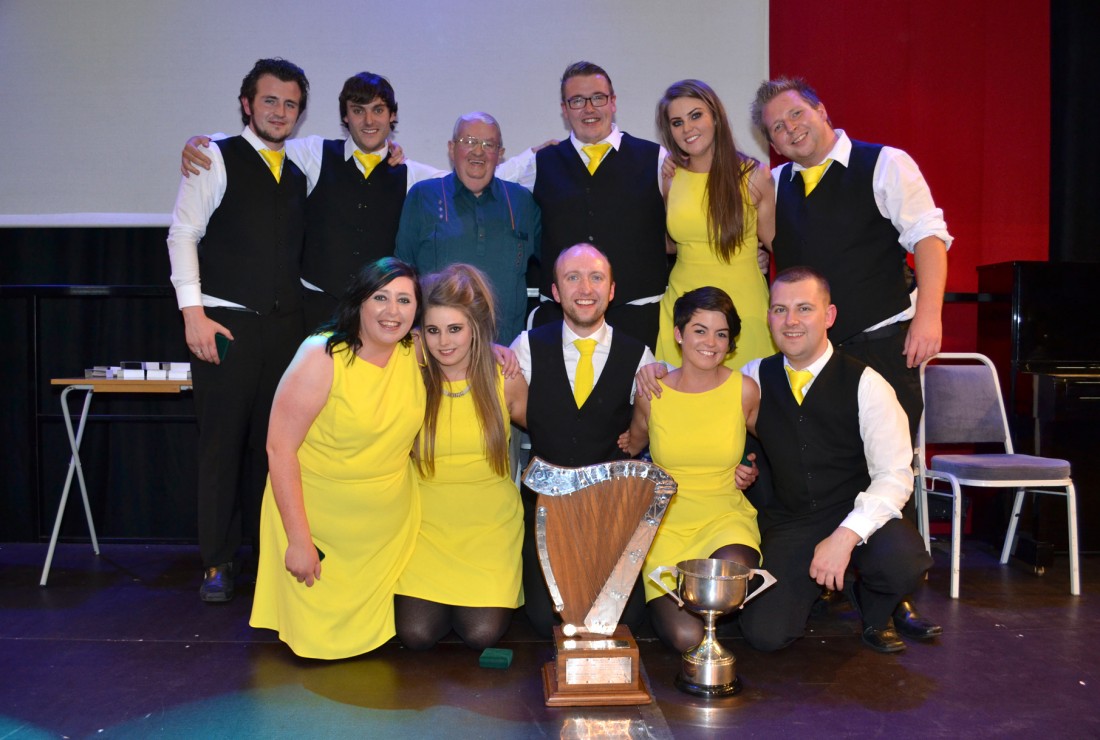 The winning Knockmore Céilí Band poses for photographs after the competition, along with Seamus Sweeney who composed one of the winning tunes, and who is a long-time mentor to some of the band’s members.

Six of its members are local, and the other four are from Tyrone.

Three winners since  competition began in 1951, and the uniqueness of the achievement was not lost on Bernie McNulty, the chairman of Fermanagh CCE.

“There were 15 in the competition, and you’re talking about a tough, tough competition”, she told the Herald.

“The competition started at 7pm on Sunday night, and Knockmore ended up on the ‘gig rig’ at around midnight. The national winning céilí band gets to play there, and it marks the finish of the fleadh.”

For Maggie Maguire, from Boho, the leader of the Knockmore céilí Band, it was a case of success at last following previous disappointments.

She reminded Sonny McDermott, Roslea, who is a member of the national executive of CCE that he had advised her after losing out in Tullamore, ‘to keep at it’.

Sonny, a highly respected figure in the movement, saw them perform at Sligo and was impressed.

“You would have a good idea, but it’s like winning an All-Ireland at Croke Park, you just don’t know until the referee blows the whistle.”

For Maggie Maguire, winning was, one of the best days of my life’: “Unbelievable. First-class. It definitely was. Yes, getting together for practice was hard, but I think everybody wanted to put in the work this year, and that made it a bit easier. Everybody had the determination to win it.”

And, Fermanagh came close in a number of other categories.