A local farmer has had his sheep flock mauled for the fourth time in ten years, leaving three dead and several others injured in a savage dog attack.

Robert Brownlee, who has a farm at Lisblakes, Florencecourt has land taken in Mullymesker from Alexis Maguire and last Friday a group of 10 ewes and nine lambs were attacked by a dog, suspected to be a Rottweiler.

Mr Maguire, explained that the animals were clipped, dosed and moved to a field with fresh grass on Friday, June 27 before they were attacked some time in the evening. The landowner told the Herald he knew the owner of the dog who killed the injured the sheep on his land, but did not wish to expose him publicly.

“This happened a couple of years ago also and when Robert went to him with the vet bill he didn’t pay for anything. It is an ongoing problem; people who are not responsible for their animals.”

In total three of the sheep were killed in the attack, with several others requiring extensive stitching work from the vet after being mauled. Mr Brownlee reported the attack to the police and to the dog warden, but he said the dog responsible for the attack remains in the care of its owner.

Speaking yesterday Mr Brownlee explained: “ The dog warden came to me this morning and told me he has no power to get the dog destroyed, he said he can only put an order on the dog to be restrained and he puts that on the licence. I understand if the dog re-offends the council can then take it.”

This is the second attack within the last couple of years noted Mr Brownlee and the latest incident has left him facing a hefty bill.

“These were hoggets; first lambing ewes and were the most expensive. One of them with a lamb you would be talking around £140/£150 and without a lamb maybe £100. Sheep are expensive, these were not just a few pounds, these were top quality sheep.

“I think I’m looking at around a bill of £500 when you include the sheep, the vet’s bill and disposal. It’s a thing you don’t want to happen, but it has.”

This latest attack has left the remaining sheep ‘traumatised’ according to Mr Maguire.

“The sheep left behind are traumatised. Wee orphaned lambs are bleating around my feet, bleating for the loss of their mother. It will take them a long time to recover after the attack.”

Mr Brownlee added: “They are just going up the walls, but hopefully they will come around. They’re eating now and hopefully we will get them out today.” 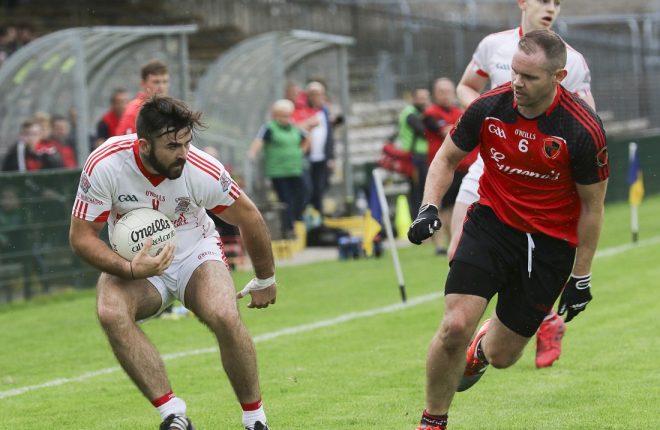 Member of the county senior panel, Kane Connor is one of the key figures in a Belnaleck side which...