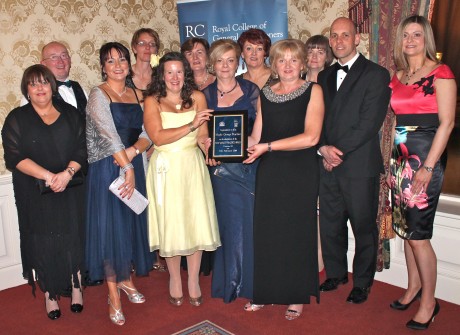 THE Maple Group GP practice based in Lisnaskea Health Centre has received the award, the highest ‘College’ accolade for quality practice from the Royal College of GPs, Northern Ireland.

Over 150 people attended the College’s Annual Gala Awards in Ballymena.

They included representatives from the governmental and statutory sector, together with GPs and practice staff.

A spokesman for the organising committee, said the awards were designed to recognise both GPs and practice staff who go that ‘extra mile’ to ensure that their patients receive the highest standards of care possible.

“As in previous years, the awards were highly competitive, with numerous nominations being received from around Northern Ireland.”

It was also a special night for the Maple Group Practice, and for Maguiresbridge-based GP, Dr Michael Smyth. He was awarded the RCGP Fellowship award in recognition of a significant contribution to medicine in general and general practice in particular.

The Maple Group’s award was based on clinical aptitude as well as patient experience.

The Royal College spokesman explained: “This award recognises the commitment of the entire team, including the attached staff, in providing high quality care for patients within a learning and adaptive environment.”

In another boost for the county, Devenish GP Practice which is based in the Erne Health Centre, Enniskillen were the first runner-up in Practice Team of the Year award.
The practice were nominated by a patient who felt the care they received from all the team was excellent.

The Royal College of General Practitioners encourages the public to become involved in the nomination process.

It is advertised annually through GP practices and local libraries, and the College is already looking forward to welcoming nominations and applications for next year’s awards.

Maria Nugent-Murphy, the Practice Manager in Lisnaskea Health Centre, thanked the wider primary care team for their input and, also, the Patient Participation Group and all the patients who contributed in any way.

Dr Miriam Dolan, a member of the Maple Group practice, who led on the Quality Award project, shared that view.

She commented: “The challenge now is to maintain and improve upon the quality standards which we have achieved through the award, and we will work diligently to ensure that this is achieved.”