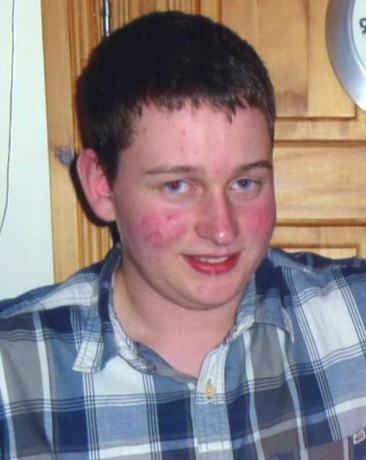 THE father of 18-year old David McNulty, Belcoo who lost his life early on Saturday on a one-vehicle incident described his son as, ‘a most precious gift from God’.

The deceased had just completed his Level 2 electrical skills programme at the South West College Technology and Skills Centre in Enniskillen, where he was hoping to progress to Level 3.

A spokesman for the college described him as, ‘a very good student’: “He was very popular with his peers, he was a very good attender, and had an exceptionally good attitude to his work.”

David resided in Crom Cruaich Way, on the edge of Belcoo, with his parents, Eugene and Clare and his sister, Sarah (16). His three brothers, Joel, Sean and Paul are all based in Australia.

It is not known what caused the road traffic accident which occurred in the townland of Lattone, between Belcoo and Garrison.

A PSNI spokesman stated that shortly after 2:55am on Saturday morning last, they received a report that a blue Seat Toledo was located off the road in that area.

“Officers investigating this incident are keen to hear from witnesses. They can be contacted at the Collision Investigation Unit by calling the non-emergency number 101.”

Burial was in the adjoining cemetery, and, at the family’s request, donations in lieu of flowers were directed to Cruse Bereavement, Northern Ireland.

In a statement to the Herald, David’s father, Eugene said his son was a well mannered and a well behaved child.

“He grew to be a quietly confident young man who loved his family and loved his friends. He was very spiritual as well as being very gifted in many fields.  He had just completed his second year’s electrical training, having recently won a special achievement award from South West College.

“David was a gentle child who grew up to be a gentleman.s We know he is with God and we look forward to being reunited with him where there will be no more pain or separation and see his smile again.”

A spokesman for South West College Technology and Skills Centre confirmed that his tutors had nominated David for ‘Student of the Year’, and he had gone on to win the award for his electrical skills.

Sean Burns, an under-age coach with Belcoo GFC, who coached David at under-14 and under-16 levels, described him as ‘a very enthusiastic and highly-mannered and popular young man who was very committed to his football’.

“My sincere condolences are with all of David’s family and young friends at this tragic time of loss.  I know all the family are devastated at their loss.  Everyone here has either gone to school, worked with or are neighbours of the McNulty and Flanagan families”.