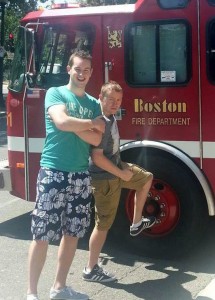 THE community of Derrylin has been left ‘numb’ after the tragic death of 23-year-old Caolan Winterson in Boston, USA.

Caolan was the only child of Val and Mary Winterson, Knockninny, Derrylin.

The former St Aidan’s High School pupil and Queen’s University graduate died as the result of a ‘freak’ swimming pool accident. Caolan had been enjoying a year out in America after graduating 12 months ago from university with a degree in Business Information Technology.

Before leaving for America he had been working in Randox Laboratories in Crumlin.

His former principal Martin McBrien of St Aidan’s High School led the tributes to an ‘exceptional pupil’ and ‘lovely lad’.

“I knew him extremely well, he was a pupil at the school for five years. He was an exceptional pupil in every way. He was appointed school prefect in his first year and deputy head boy in his fifth year.

“He was extremely courteous, well-behaved, diligent and hard-working young man. He was a shining example for the rest of the school community.

“He was extremely popular with teachers and pupils alike. From the day he stepped in through the doors to the day he left I don’t think he put a foot wrong.

“We’re all devastated by his death and extend our sincerest sympathies to Val and Mary.”

Mr McBrien continued: “Every day for the five years his mother used to drop him off early and he was always here at the doors of the school waiting for me to open up.

“He was always the first pupil to arrive and it is something I will never forget. He was just a lovely lad and one of those lads you just couldn’t help but admire.”

In addition to excelling in the field of academics Caolan was also a star on the gaelic football field representing Derrylin GFC at all levels up to seniors. Vincent Martin, PRO at Derrylin GFC told the story of a ‘gentle giant’ who was a model young man.

“He played goalkeeper and was very tall, but he was a gentle giant. He was 6ft 5 and built to match, he was a fine specimen of a man.

“He was quiet, unassuming and no one would have had a bad word to say about him.

“It has a left a massive void in the community and he had only been gone two months. The way it happened also in such tragic circumstances, it is unprecedented.

“I got word yesterday morning (Sunday) around 9.30 in the morning and I was in shock, I couldn’t believe it.

“The size of the man you would almost have thought he was indestructible. I wouldn’t say he was ever in trouble in his life, he was so well-mannered. Others might have the devil in them, but not him. You would have to travel far to get better.”

Derrylin Parish Priest Very Reverend Fintan McKiernan told the Herald the community has been left ‘totally numb’ by the tragic death of an active participant in the parish.

“We heard about it on Sunday morning at Mass for the first time and there were tears all around. You could feel it in the atmosphere, it was so apparent the sense of loss.

“He was a lovely fella and wasn’t a wild character, so there is no question of drugs or anything else.

“He had just gone out for the year to Boston, he didn’t plan to stay long, he had just taken a year out for the experience, it’s just what young people like to do.

“It is a very sad time in the parish and everyone in the community has such sympathy for the parents. He was their life.”

It is expected that the body will be released from Boston yesterday (Wednesday) after a post-mortem is carried out, but as yet there is no confirmed date for the funeral service.