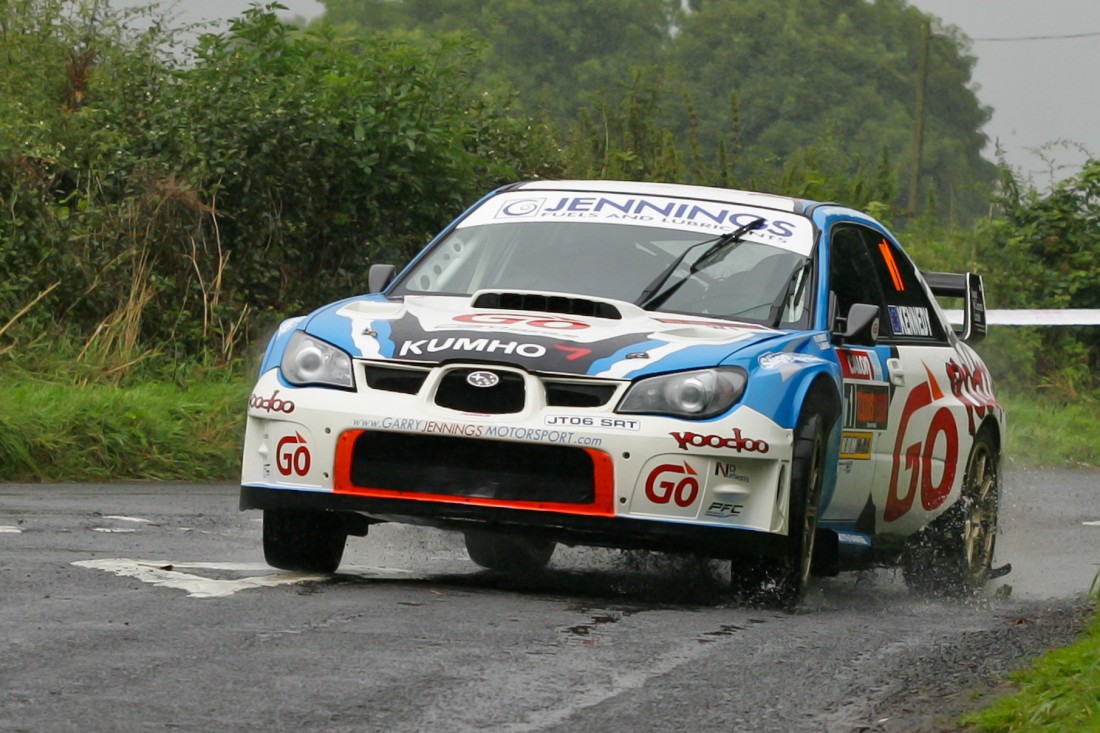 The Kesh man and co-driver Rory Kennedy got off to a strong start only a few seconds off the pace in the first few stages, although the Subuaru crew reported extremely heavy rain out on the early Friday morning stages, saying their wipers could hardly cope with the deluge.

This all despite it being overcast but dry at the start of the rally in Letterkenny.

The early rally leader was local man Declan Boyle who had his brother Brian as his co-driver in a similar Impreza WRC with Sam Moffett and James O’Reilly in second place in a Fiesta WRC.

After the first three stages of the rally Sam Moffett had taken the lead over Boyle with Jennings now in third, 12 seconds behind.

The Fermanagh driver remarked, ‘Those boys in front are on some mission. My car is OK but it’s a big slack going up the gears.”

On stage four Donegal driver Darren Boyle moved back into the lead after the leading Fiesta of Moffett got a puncture. Both cars beat the bogey time for the stage, as did Jennings which meant they all got the same time, so the postitions at the top didn’t change.

By the end of the first day (Friday) Jennings had lost a few seconds to Darren Gass in another Impreza and had lost third place to him, but there were still two long days of rallying to go.

Garry and Rory had a relatively uneventful Saturday and reported no major problems with the car although remaining in third place.

However, both Jennings and Darren Gass were furious when a marshall waved a yellow flag at them while approaching a chicane of hay bales despite their being no hazard. An early car had clipped one but caused no damage to the obstacle.

There was more drama to come as during the day a spectator was hit and injured by a rally car and another spectator needed medical treatment when he fell off a wall.

And it was unlucky stage 13 for Gass who crashed his Fiesta which ended up blocking the road and only the first two cars got to compete on the stage.

Jennings, and the rest of the field, had to file past the stricken car and were given a scratch time for the stage. This promoted Jennings back up to third.

On the Sunday stages Jennings said he was just trying to keep it clean and consolidate his third place, and stay out of trouble.

He was too far behind first and second to realistically challenge, and Derek McGarrity, (in fourth) wasn’t a major threat either.

The Kesh driver even had to cope with a small fire in the car on Sunday afternoon but still made it back to Letterkenny to take a third place finish.