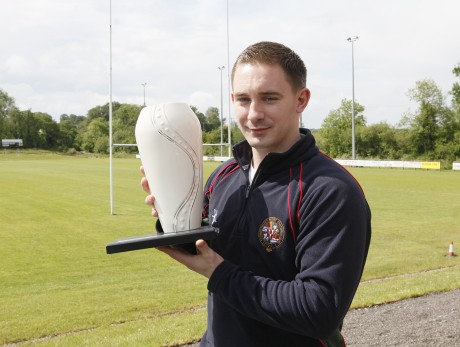 Aaron Best, Clogher Valley’s new Captain and winner of the Fermanagh Herald Sports Personality of the month for March

Clogher Valley scrum half Aaron Best didn’t see much of home during March.

For the talented Clogher Valley rugby player it was hectic and it was all down to the club’s successful season.

By the end of the season the Valley had won a league and cup double and reached the final of the All Ireland club competition.

“It was a great year, even though we had a few ups and downs. We finished strongly and were really pleased with our achievements,” said the Ballygawley based man.

“Because of our good run in the competitions it turned out to be really hectic. It was just straight from work to training three times a week and then games on Saturdays,” he added.

“I suppose the disappointment of losing the All-Ireland final made us even more determed to win the league and Towns  Cup. From that stage we knuckled down even more to the hard work that was needed to achieve and so it proved with our strong finish in both.”

It was a huge commitment for Aaron and his colleagues at the Cran, but he is the first to admit that when everyone pulls together at the club it does make things much easier.

“Everyone showed a great commitment, training three or four nights a week. But the success made it all worthwhile,” said Aaron.

“They are a good bunch of lads down there and it makes such a difference when we’re all pulling in the same direction.”

The scrum half has been playing the game since the age of 13 when he started at Fivemiletown High School. Since then he has played right throug the ranks at Valley and next year takes over the captaincy at the club.

“I’m looking forward to it, but there will be a lot of pressure there to make the grade to All Ireland level. But it will be with the same group with maybe one or two additions and they will be stronger and wiser.”

Aaron said there was no secret to Clogher’s success, particularly in the final months.

“It just came down to hard work and commitment. We were able to deal with the pressure because we shared it. We took one game at a time and I think that worked well for us.”

“There was leadership everywhere, from the coaches, the staff, the players. Because we have a range of ages on the side there could be four or five capains on the pitch at any one time. They are all decision makers and it makes the game so much easier.

“Next year there will be a few improvements and we’ll keep working hard for that illusive All Ireland place.

“It was been a wonderful achievement for such a small club and it is months like March that make it so enjoyable,” added the 28 year old.