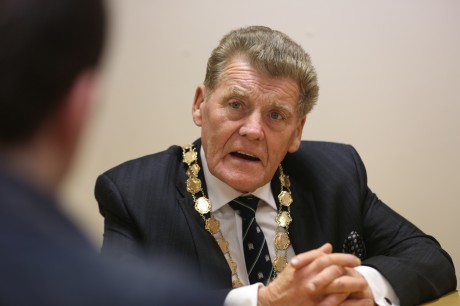 DUP veteran Bert Johnston has been named as the last chairman of Fermanagh District Council. Johnston was the DUP party’s choice of nomination and he will be joined by Sinn Fein’s Ruth Lynch as vice chairman. Both were appointed at Monday’s meeting of the council.

Speaking after the meeting Bert admitted his delight at being allowed to ‘go out on a high’.

“I’m absolutely delighted due to the historic factor that I will be the last chairman of Fermanagh District Council. It is history and probably history in another sense also as I am 37 years on the council and just getting the chair now.”

At Monday’s meeting Bert joked that no-one else in the party had wanted the position, but later acknowledged those within the party for affording him the opportunity.

“I think there might have been others that would have liked it, but I must say my party colleagues were fully behind me, they said it was my chance and that I deserved it and I appreciate them wanting to be so generous towards me, because a miss tonight is a miss altogether and they seemed to want me to have it.”

A previous vice-chairman of the council Bert is looking forward to the work in his new role.

“I will enjoy it, it’s not work I will be perspiring at, but it will be work I think I will enjoy. It’s nice to do it for the people.”

He continued: “I think I’m going out on a high, I feel good about it. I’m not so sure I felt so confident coming in the road, but I feel confident about it now. It’s a great honour to be the last chairman of Fermanagh District Council, it’s history and I’m enjoying that part of it.”

In his ten months as chair and last year as a public representative Bert hopes to oversee the development of leisure facilities in the county and improve on the county’s recycling record.

“One of the things I will be encouraging very much is recycling in Fermanagh District because it has not been what I would have liked it to be. 38% recycling could be a lot better and I think we need to people educated and a lot more can be done.”

As for his style of chairmanship Bert will put party politics on the back burner and aims to give each party an equal voice.

“I have beliefs maybe that are different to others, but I won’t be rubbing anyone’s nose in it, I will be acting as Chairman and being impartial. I do believe in free speech, but that doesn’t mean you don’t pay your telephone bills.

At Monday’s meeting councillor Johnston’s peers wished him the best for his role and acknowledged his noteworthy 37 years of service to the council.

He thanked councillors and praised outgoing chairman Alex Baird, who he praised as a chair who ‘pulled out all the stops’. “I truly believe I have big shoes to fill,” he added.