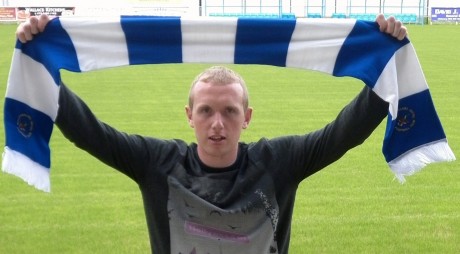 Ballinamallard United have made their second significant signing of the close season.

He captained St Kevin’s Boys Club in Dublin at under-16 level and played for Finn Harps senior team in 2011.

Raymond played for Carlow Institute of Technology 2010-13 and represented the Irish Universities at the World Student Games in Russia last year.

The 21 year-old has had trials at Southampton, QPR and Aberdeen and has played six times for Derry City in the 2014 league campaign.

Manager Whitey Anderson said “I am delighted to obtain the signature of Raymond on a year’s loan from Derry City.

“Raymond comes highly recommended and it’s an agreement that suits both clubs. There are various scenarios going on within the squad and this signing is one that could prove very beneficial in the long term. Raymond is a competitive, energetic midfielder who can play a holding role or a more advanced one if needed. He likes to get on the ball and play and he will fit in with what we want to do this season. His attitude and desire is something that has appealed to me, and competition for places centrally is going to be fierce. It’s up to all our midfielders now to claim a place for the first game of the season when pre-season starts in two weeks.”