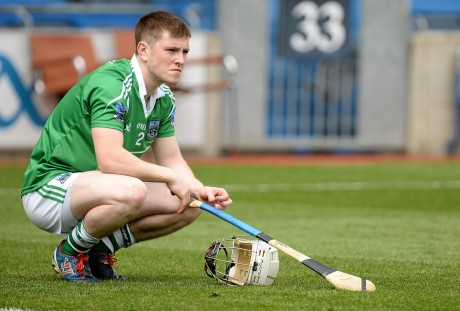 FOR the second time in two years, Fermanagh hurlers came up short in the Lory Meagher Cup final.

In 2012, they lost by a point to Tyrone after extra time and, on Sunday last, by two points to opponents that upped their game in the second-half.

At the break, Longford trailed by two points (2-8 to 1-10), after a half in which Fermanagh wasted several scoring chances.

Critically, Longford hot the ground running on the restart and a superbly struck free from the halfway line by their top scorer, Eoin Donnellan ushered in a spate of scores, including a well crafted goal from Joe O’Brien that put the 5 points to the good (2-9 to 2-14) after just 7 minutes.

Yellow cards were freely in this half and, unfortunately for Fermanagh, their top defender, Daniel Teague, having already been ‘yellowed’, got his marching orders when an off the ball incident was drawn to the attention of the referee.

His loss was acutely felt up front where Fermanagh’s man of the match, Sean Corrigan was causing havoc, with good support coming from three-goal hero, Declan McGarry.

To their credit, the team management tried to fill the gap, bringing  back Matthew Teague’s, Daniel’s brother and bringing on Shea Curran.

Fermanagh’s character was never found wanting but points from Corrigan (free) and Ryan Bogue were immediately nullified by a goal from a Donnellan 65-metre free.
With 15 minutes left, Fermanagh seemed to be handed a lifeline when Longford defender, Conor Egan got his second yellow.

This led to a series of 21 metre frees conceded by Longford, from the first of which, John Duffy’s strike was saved by the goalkeeper.

Still, they kept plugging away, and got their reward when, with the score at 2-16 to 3-17, Corrigan’s mazy was illegally ended and Declan McGarry’s 21 metre strike found the net.

Somehow or other, Fermanagh were a point behind (3-16 to 3-17) and, a miracle looked on when Corrigan cut in from the right and beat two defenders before kicking the ball to the net, but the goalkeeper was up for it.

Then, in what was to be their last attack of the match, Fermanagh won another 21-yard free. Declan McGarry again pulled the trigger only to be denied by O’Brien.