Advertisement
HomeHeadlineGame changer or political circus? The jury is still out on the G8
Advertisement 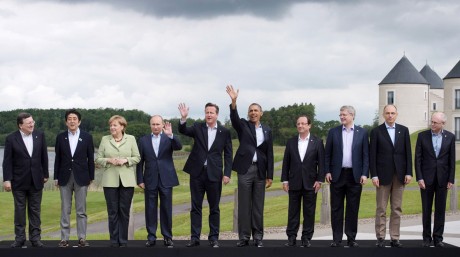 It is almost one year on from the G8 conference, the biggest event to ever come to County Fermanagh. June 17 and 18 2013 will forever go down in history as one of the most peaceful G8s ever and indeed possibly the very last.

Twelve months on from Obama, Putin, Cameran et al visiting Lough Erne local people in the political, tourism and business fields have voiced their opinions on the impact the global conference has had, with both positive and negative views expressed in equal measure.

At the positive end of the spectrum it has been argued by former council chairman Alex Baird that we couldn’t have paid for the world-wide publicity we received and he stated that Enniskillen has never looked better as a result of the dereliction scheme utilised in the town.

He and businessman Terry McCartney also share the belief that the decision for the Lough Erne Resort to host the 2017 Irish Open is a direct result of the profile garnered from the G8.

In terms of tourism, local providers have reported positive figures 12 months on, with all unanimously agreeing the G8 has put ‘Fermanagh on the map’.

Acting council chief executive Robert Gibson highlighted another benefit to the county through the extensive road infrastructure improvements on account of the G8.

Mr Gibson however, also spoke of two of the failings from the G8, the so-called ‘legacy’ projects. The ambitious water park plan and proposed Enniskillen by-pass have both been deemed as ‘unlikely to go forward’, in what must be considered locally as a blow.

The negativity surrounding the announcement of the Lough Erne Resort of the G8 remains very much evident in many circles today.

One of the leading anti-G8 activists Donal O’Cofaigh said there has been no long-term benefit to the county aside from media coverage, while local councillor Bernice Swift highlighted the ongoing problem of telecommunications in rural Fermanagh which has been in no way alleviated by the G8.

Others argue that jobs have been taken out of the county through the county at Quinns, Flynn Foods and the DVA and not brought in as had been previously hoped.

“There has been no benefit to creating much needed jobs for Fermanagh, no significant boost to the economy, definitely no increases to the wages of our workers or indeed there has been no long-awaited mobile and broadband signal,” she commented.

While Phil Flanagan presented an equally damning view on the impact of the world conference.

“There is no legacy. The only thing that has happened is David Cameron lifted a table from Fermanagh and brought it to London.

“There’s been no legacy from it and all the promises that were made have amounted to nothing. As always tends to be the case in Fermanagh.”

It is up for interpretation the value of the G8, but there is no doubt that for two days in June last year Fermanagh was shining in the spotlight of the International world.