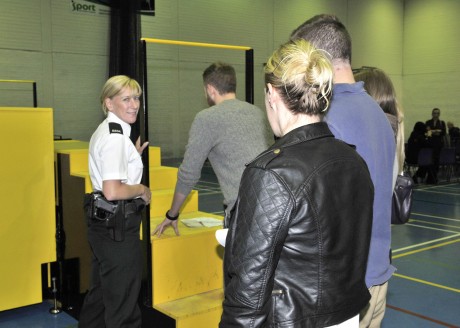 At the previous PSNI recruitment event in the Lakeland Forum, constable Leslie Ward with some of the people who turned up to learn more about the career

IN A MOVE that has provoked outrage from one local Assembly member, the PSNI has decided not to hold any of their 20 recruitment information sessions in Fermanagh.

Despite sessions taking place in Omagh, Strabane, Dungannon (two) and Cookstown among other areas Enniskillen has been overlooked, with a total of 378 positions to be filled in the latest round of recruitment.

The information sessions were brought to prominence last week after a firebomb attack on the Everglades Hotel, Derry. The venue had hosted such an event the week previous.

Ulster Unionist MLA Tom Elliott has criticised the PSNI for ignoring Fermanagh in this process and dismissed any notion that security fears could have impacted on the decision.

“In order to provide a fair and open recruitment campaign across Northern Ireland it is vital that everyone should have an information session close to them. It is therefore with some concern that I note the absence of an information day in Fermanagh.

“The west of the country has nothing at all, yet some areas like Dungannon are getting two. I just think it’s nonsense not having one in Fermanagh. I can’t understand what the reason is and I have written to the Chief Constable.

“Is there a reason why Fermanagh has not been provided with an information day? The previous recruitment drive had an information day held at the Lakeland Forum in Enniskillen and this was well attended suggesting that there is a strong interest in the area for individuals to join the PSNI.

“The PSNI serves all of Northern Ireland and not just individual regions. It would therefore seem somewhat unfairly biased against people in Fermanagh to discriminate against them from this current leg of the recruitment process.”

Mr Elliott is determined to bring a recruitment evening to Fermanagh and is making efforts with the Chief Constable of the PSNI.

Local Sinn Fein councillor and member of the Policing and Community Safety Partnership Debbie Coyle said it wasn’t unusual for Fermanagh to be left out.

“I’m not sure I would go as far as calling it discrimination, but a lot of these training sessions, from whatever department have them in Derry, Dungannon, Omagh and not Fermanagh. Whether it’s policing, transforming your care, social welfare they all seem to be held anywhere else but Fermanagh and it is an issue we are bringing up.”

While she did not encourage people to apply councillor Coyle stated her belief that people in Fermanagh should be allowed the same opportunities as those living in the rest of the North.

“To get a bus to Omagh and back for just basic information I think there are people who could possibly miss out, it is an issue of fairness.

“It is not about encouraging people into one area of work, it is about ensuring for all areas of work there is adequate information available and people are treated fairly.”

In response to queries from the Herald a spokesman for the PSNI said the last familiarisation event here was held on September 19, 2013 at the Lakeland Forum.