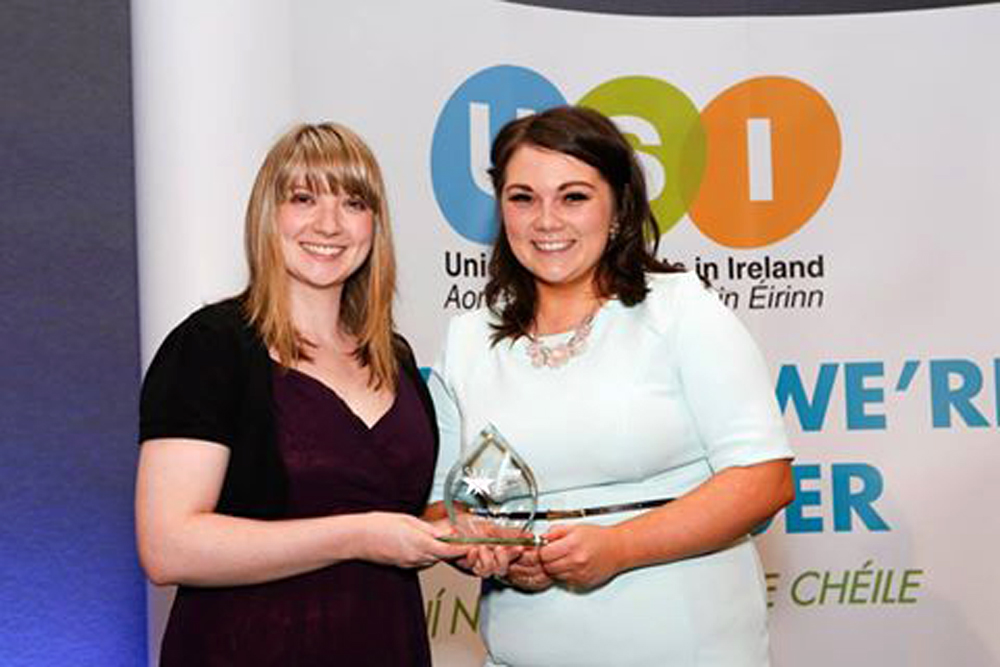 Jemma is pictured (on the right) with Rebecca Murphy, a peer assisted student support co-ordinator at University College Cork who was the judge for the category.

A BELLEEK student at the University of Ulster has won a ‘Student of the Year’ award for her efforts in raising awareness of mental health in the university.

After completing her degree in Media Studies with Photo Imaging, and graduating in 2012, Jemma Dolan became the vice president for campaigns and communications for the Students Union. She was adjudged winner of the ‘Welfare Campaign of the Year Award’ for her ‘PIPS’ campaign at the Student Achievement Awards Ireland, held in Dublin Castle.

The awards were hosted by the Union Of Students Ireland, and recognise the work by students which benefits their college, community or country and had entrants from universities all across Ireland. The event was attended by the President, Michael D Higgins.

He heard how Jemma single handily successfully applied to the Big Lottery fund for funding to be able to deliver  her workshops.

As a direct result of the programme she delivered, 150 staff and students were trained in suicide awareness and prevention training.

In fact, the University were so impressed with her work that they began research into getting all students trained in mental health awareness.

As a result of further funding secured and two workshops, 390 staff and students at the UUU will have availed of Suicide Awareness and Prevention Training.

Jemma now appears on their website representing the work done in universities across Northern Ireland.