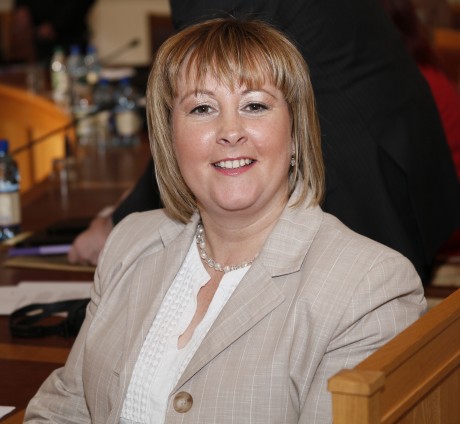 THE WORK of one local councillor has aided in the release from prison of human rights activist and playwright Margaretta D’Arcy.

The 79-year-old was released from Mountjoy prison in Dublin on Saturday after serving nine and half weeks of a three month term.

D’Arcy was jailed for refusing to sign a bond to uphold the law and keep away from unauthorised zones at Shannon airport.

She was arrested in Galway on January 15th and taken to Limerick to serve a three month sentence for illegal incursion of the runway at Shannon airport on October 7, 2012.

The sentence had been suspended when served at Ennis District Court last December, but was activated when she refused to sign the bond.

After she was jailed local Independent councillor Bernice Swift voiced her oppostion at March’s meeting of Fermanagh District Council and called her immediate release.

She received the support of the nationalist councillors and it was agreed a letter be sent demanding the release of the prisoner to Taoiseach Enda Kenny, Justice Minister Alan Shatter and a letter of support sent to D’Arcy herself.

Speaking after D’Arcy’s release councillor Swift expressed her pleasure at the development.

“Whilst I am absolutely delighted at the long overdue release of peace activist Margaretta D’Arcy who opposed the Irish Government’s complicity in war crimes by permitting drone flights for the US military through Shannon Airport, I am abhorred at the ongoing collusion of the European states in extraordinary rendition. People like Margaretta will always stand firm against the use of Ireland for war crimes and I too stand with her in opposing the use of US warplanes out of  Shannon Airport.”