Advertisement
HomeHeadlineWhy is Enniskillen’s new cycle path being left in the dark?
Advertisement 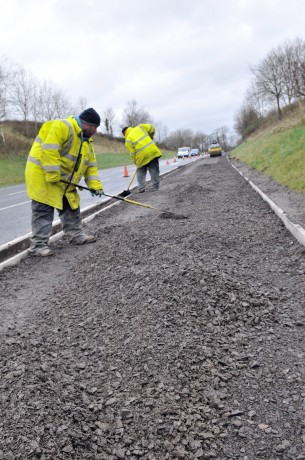 A NEW 1100m cycle lane costing £100,000 will allow Enniskillen residents to benefit from better leisure infrastructure, but the path will not be lit, much to the dismay of one local councillor.

Work began on the cycle lane two weeks ago which will link up the existing cycle track on the Dublin Road in Enniskillen.

The area also forms part of the annual Enniskillen 10k route and is used frequently by leisure runners and walkers in the area.

The work being carried out by the Department for Regional Development will transform the leisure path on the main Enniskillen to Belfast route and local SDLP councillor Frank Britton, who uses the path for running and cycling has welcomed the move in principle.

“It needed to be done in any event, it is only a very narrow path about two flags wide and it wasn’t a good even surface.  It wasn’t great for running and certainly wasn’t great for cycling.

“It needed to be improved from the point of view of people living in that area going in and out of town and in and out of school in the Killyhevlin domain.

“Also as a piece of leisure infrastructure development it is necessary. It is definitely a move to be welcomed.”

Mr Britton stressed though his concerns as we enter the winter months.

“There needs to be some kind of lighting especially in the winter, as it gets dark at 4.30pm.

“You will have people walking home from school and from work and they will find it difficult to see in front of themselves.

“I have been involved in the campaign  for improvements for the past three or four years for pedestrians and cyclists.

“They ideally wanted the path to go out the Lough Yoan Road past the Killyhevlin Industrial Estate and Roads Service did some of that work, but that wasn’t deemed thebest option and instead they have chosen this route, which is certainly part of fixing the problem.

“I would though have concerns in the winter months.”

A DRD spokesperson explained a bit more about the work currently being carried out.

“While there were requests from the public for upgrading, work had been planned to raise the cycle path as it was prone to flooding. At this point there are no current

plans to light the path.”

DRD Minister Danny Kennedy added: “I am determined that my department will play its part in putting walking and cycling at the heart of our local transport arrangements. I recently established a DRD Cycling Unit to increase focus and priority to the needs of cyclists, and pedestrians, and to encourage greater participation in cycling.
“The proposed path will benefit not only cyclists but also the many pedestrians and joggers who frequently use this route.”