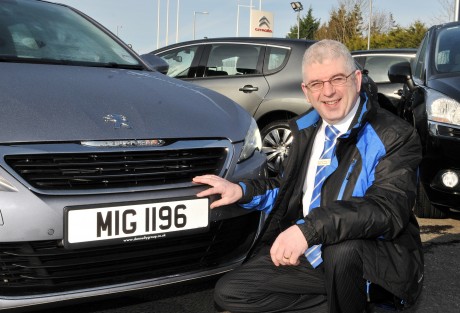 LICENSE plate numbers beginning with ‘NIG’ and ‘PIG’ will not be coming to Fermanagh because they are considered ‘inappropriate’ by the Driving Vechicle Agency.

A spokesman confirmed to the Herald this week that the mentioned will not be issued, and the next series due to be issued in the county will be ‘OIG’.

Oeugeot dealer principal with Enniskillen car dealers Donnelly Group, Michael Dolan, said that it was to be expected that those particular license plates would be omitted, and also noted that the current, ‘MIG’ are being used up at a very quick rate.

Mr Dolan said that at the moment, MIG is at about 4000 plates through.

“It would generally last about a year – at the moment it would be at about 4000. Usually there would be about 9000-odd numbers,” he explained.

The rate at which MIG license plates are being issued, is in line with what industry figures believe is the strongest period of car sales in the North since 2009.

According to the latest figures, first time registrations (for both new and used vehicles) rose by 20% in the final quarter of 2013 over the 2012 figure.

Mr Dolan said that the he and his colleagues had noticed an increase ‘from about the middle of last year’.

“The first quarter sales have increased for this year and the real reason is down to the dealers doing the best deals that they can.

He added: “It’s like anything, it’s a nice place to be but it’d be good to keep improving.”