Advertisement
HomeSportGAATackling matters: The GAA has a responsibility to put the player first
Advertisement 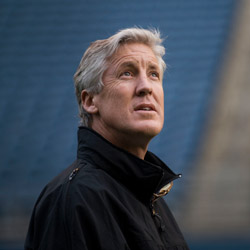 “Innovation distinguishes between a leader and a follower.” – Steve Jobs

The above quote, from the man credited as the driving force behind the spectacular success of Apple, should be something that all coaches and managers in all sports think seriously about. But, as is human nature the instinct is to copy what works elsewhere.

Staying with the theme of quotes from across the Atlantic and to pursue the concept of innovation in coaching perhaps we should also consider the following;
“I wanted to find out if we went…and really took care of guys, really cared about each and every individual, what would happen?”

It was said by Pete Carroll, the head coach of the Seattle Seahawks. His side romped to victory in the Superbowl at the weekend destroying the Denver Broncos, allowing them just one score.

Carroll is beginning to be regarded as a visionary but up to now he was seen as a ‘soft coach’ who was ‘too friendly with his players’.

What could never be disputed however was the fact that he was an innovator. The Seahawks have completely changed the way their organisation works.

Just as important as the physical work they do to prepare the players is the mental work that is carried out, and not just in respect to mental preparation for the game through sports psychology, although that is hugely important too. But what makes the Seahawks different is that they look at the mental well being of their players.

In fact they have a whole set of staff who specifically look after the players in that regard. They help them adjust to life in the NFL, deal with set backs in both their professional and personal lives and when they near the end of their careers help make that difficult transition into retirement.

This type of management can only be achieved in a professional environment but the fact that so few other professional teams are willing to go this far betrays a sadly recurrent theme when it comes to coaches and managers all over the world, be they professional or amateur.

And that is that players are seen as objects. As physical specimens to be moulded and made perform.

If we think about that for a moment that should disturb us. And in relation to the GAA it should be perhaps even more worrying. But more on that later.

Before leaving Carroll and the Seahawks it is important to dispel the notion that you may have reading this that their training camp is some sort of hippy commune with everyone doing yoga and chanting. It is not, although they do all do yoga.

Carroll has certain requirements from his players before they can be part of his grand plan. They must willing to learn and willing to buy into a new way of doing things.

hey must be punctual and they must have the desire to work hard. It is essential that players have these central tenants but importantly they exist alongside a coaching philosophy which says that the happier a player is the better he will play.

From a GAA perspective there is a lot we can learn from this type of approach.

Firstly from a simply common sense standpoint it removes us from the days where managers and coaches ridiculed and berated players for making mistakes. Unfortunately this is still all too prevalent among our games.

It is pointless and counter productive. Humiliating a player for an honest mistake will simply make him more likely to repeat it.

I always thought a coach who acted in such a manner to be a bully and incapable of looking inward and analysing their own coaching strategy. If they did they would no doubt find that it was their own performance as a coach that manifested itself in the teams poor performance.

So, if we accept that a move toward a more player centred coaching would lead to more success should all managers and coaches not adopt such a style, if even only for purely selfish reasons?

But here is the thing. In the GAA we should do it anyway, regardless of whether we think it is better or not. We are a unique sporting organisation.

At our very core is community.

Players may move clubs on the odd occasion when they move home but by and large we are a sporting organisation where your participation is rooted in your place of birth. That wonderful core principal should come with a responsibility.

We should not look to discard players. Be they hot-headed, difficult to manage or not that talented. Quite the opposite in fact.

As an organisation we should look to nurture our players. Yes, there should be ‘rules’ that players adhere to.

But these rules should not be designed to ridicule or place some on a higher pedestal but rather as a means to build character to help aid the development of not only the player as a footballer or hurler but to help the player become a better more rounded person.

Sport can do that.

The GAA can do it better than any other. If we choose to put the player first and our thirst for quick success second.