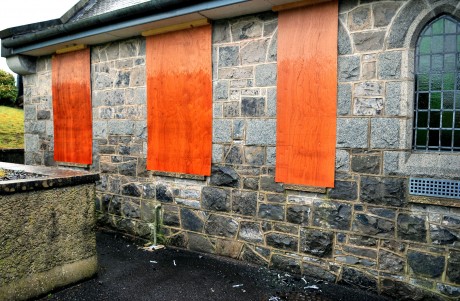 Windows broken at the Irvinestown Chapel

THE BILL for repairing a Catholic church targeted by thieves for the second time in a month, could run into thousands of pounds.

The Sacred Heart Church on the Lisnarick Road, Irvinestown has had two windows broken in the past month, the most recent attack just last week.

The incident was discovered on the  morning of Thursday  February 20th at around 8.45am and Parish Priest Fr Michael McGourty admitted the cost to replace the windows could amount to thousands.

“There was nothing taken as no money is kept in the church, but a window was broken at the back. There is no previous history of burglary at all, but we had a similar incident last month when another back window was broken.

Fr McGourty dismissed any suggestion that the attack was sectarian in nature.

“It is definitely not sectarian, I’m certain of that. I wouldn’t say we are concerned – this is just a small group and is not reflective of the Irvinestown community, it is just opportunism and people hoping to get some easy money, but as I said there is none kept in the church.

“It is just unusual, the church has never been broke into in the last 20 years, we have never seen this type of thing before and the people are very disappointed.”

When asked if the church would be increasing their security in light of the two attacks, Fr McGourty said this was an issue he would be discussing with the parish committee.

Local SDLP councillor and parishioner John O’Kane spoke of a very ‘distressing’ experience for parishioners along with Father McGourty and Canon Timoney.
“I think it is maybe the third break-in now.

“It is a bit silly, the people concerned should have known there was no real money kept on the premises, in today’s climate you don’t leave money lying around the church.

“It is extremely sad that somebody would break into a church, most people respect that this is sacred property.

“It is very distressing for the two priests and the parishioners for whom the church means so much. I truly hope it doesn’t happen again.”

Police confirmed that following the latest attack a juvenile has been reported to the PPS on suspicion of burglary.