Advertisement
HomeHeadlineButter buried in bog in Tempo could be up to 1,500 years old
Advertisement 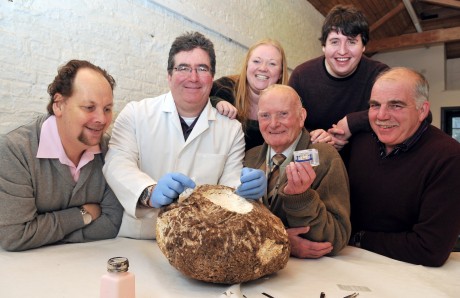 Members of the Shannon Family, Brendan Jack and Martin who found a Butterball while cutting turf in the bog, at Carnaguilta Tempo in 1980. They are pictured with Colin Fawcett, from the Enniskillen Castle Museum as her takes a sample of the Butterball to be Carbon Dated to see how old it is. Also in the picture are students from the University of Ulster. The item has been on display in the Museum for some time gkfh10

A 3lb block of ancient butter unearthed in a Tempo bog, and now permanently housed at the Fermanagh County Museum, could be 1,500 years old!

But, thanks to an intriguing piece of historical detective work now taking place, a more definite date, it is hoped, can be arrived at.

The unusual ‘bog butter’ was unearthed 30 years ago by Jack Shannon and his sons, Brendan and Martin while cutting turf in a bog at Carrownagiltagh, near Tempo.

Father and sons handed in their find to the museum for safe keeping and, last week, they were invited back to hear about dating research being undertaken by the museum with the help of students from the University of Ulster Museum Studies.

Mr Shannon recalled for them how he had unearthed his find.

“I was cutting turf with my two sons and noticed this white thing sticking out of the side of the turf bank.

“More out of luck than good guidance, my turf spade never touched or damaged it. Finding it was just remarkable, and I donated it to the museum to make sure it stayed within the county.”

A spokesman for the museum told the Herald that the practice of burying butter in a bog to preserve it for consumption in the winter months dates back to Early Christian and Medieval times.

“In some rare cases”, she added, “bog butter found has dated as far back as the Iron Age, when depositing butter may have been for ceremonial purposes.”

She reported that the ‘Tempo bog butter’ was now greyish-white in colour with a texture like candle-wax  – it apparently tastes a bit like soap and smells of cheese.

The ‘Tempo bog butter’ is one of the first artefacts to be highlighted as part of a research project, ‘Fermanagh: a history in one hundred objects’ .

As Mr Shannon and his sons, Martin and Brendan, and the students looked on, the museum conservator, Colin Fawcett, took a tiny sample from the bog butter for analysis.

The core sample was later delivered by the students to the radio carbon-dating facility of Queens University, Belfast to test its vintage.

The results are expected in the next few months.

Sarah McHugh, the manager of the Fermanagh County Museum said its dating would help us to uncover an aspect of Fermanagh’s agricultural past.

“It will be fascinating to find out the date and, so, add to our knowledge of this important object in our collection.

‘Fermanagh: a history in one hundred objects’ is a project involving people from the local community, historians, students from the University of Ulster and Young Friends of Fermanagh County Museum.

On Friday, 21 February, at 8pm, a free talk,‘Fermanagh: A Story in 100 Objects’, will be given by museum staff and its former curator, Helen Lanigan Wood, at Enniskillen Castle Museum.