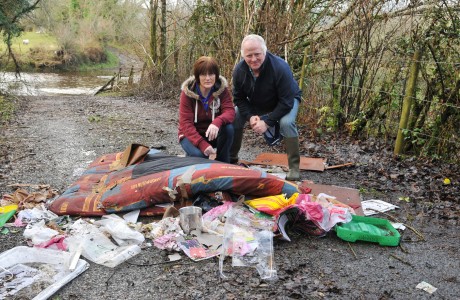 Sean and Mary Cox, Gortoral Road Kinawley pictured beside some of the rubbish dumped beside their land

KINAWLEY residents have expressed their anger and disgust after litter louts dumped household waste including mattresses, dirty nappies and Christmas decorations in one of the county’s most beautiful rivers.

Sean and Mary Cox discovered the waste which was strewn across the embankment of the Cladagh River, just a hundred yards from where the married couple live.

Shockingly, despite the incident being reported over a week ago, the abandoned rubbish still remains there.

Some of the discarded items include unwanted Christmas decorations and toys, an old mattress, dirty nappies, children’s play mat and a credit card receipt.

Mr Cox say the litter louts are creating an eyesore in the area and called for more action to be taken to stamp out the ongoing problem.

“It seems to be all household waste and rubbish but it’s bigger than the day to day stuff as there are Christmas decorations, including teddy bears and reindeers,” he told the ‘Herald’.

“The people who dumped this stuff have obviously been clearing out their house after Christmas.

“It’s not just small items but big things that aren’t easily shifted and it’s all close to the edge of the river which is worrying.

“It’s meant to be one of the cleanest and freshest rivers in Europe, so we are told, and this is going to have an impact on the river.

“From a farmer’s point of view, if any of that rubbish enters the river and it reaches their farm land, it will be the farmers who will have to get rid of it.

“There are perfectly good disposal areas in Kinawley and Lisnaskea which people can use and I don’t understand why they don’t,” he added.

The dumped waste was reported to Fermanagh District Council over a week ago, however the couple say the rubbish has not been moved and want more signage to be erected in the area to warn potential fly-tippers.

It’s not the first time the couple have discovered waste in the area and say it’s becoming more frequent with some people using it as a dumping ground for their household waste.

Mr Cox continued: “The fly-tippers have left a pile of children’s play mats too. It has happened before, but on a smaller scale like a couple of black plastic bags.

“But this time it’s much more than that. The longer it goes on the more damage it will cause. We actually found credit card receipts from Poundland among the rubbish so we hope something is found from that.”