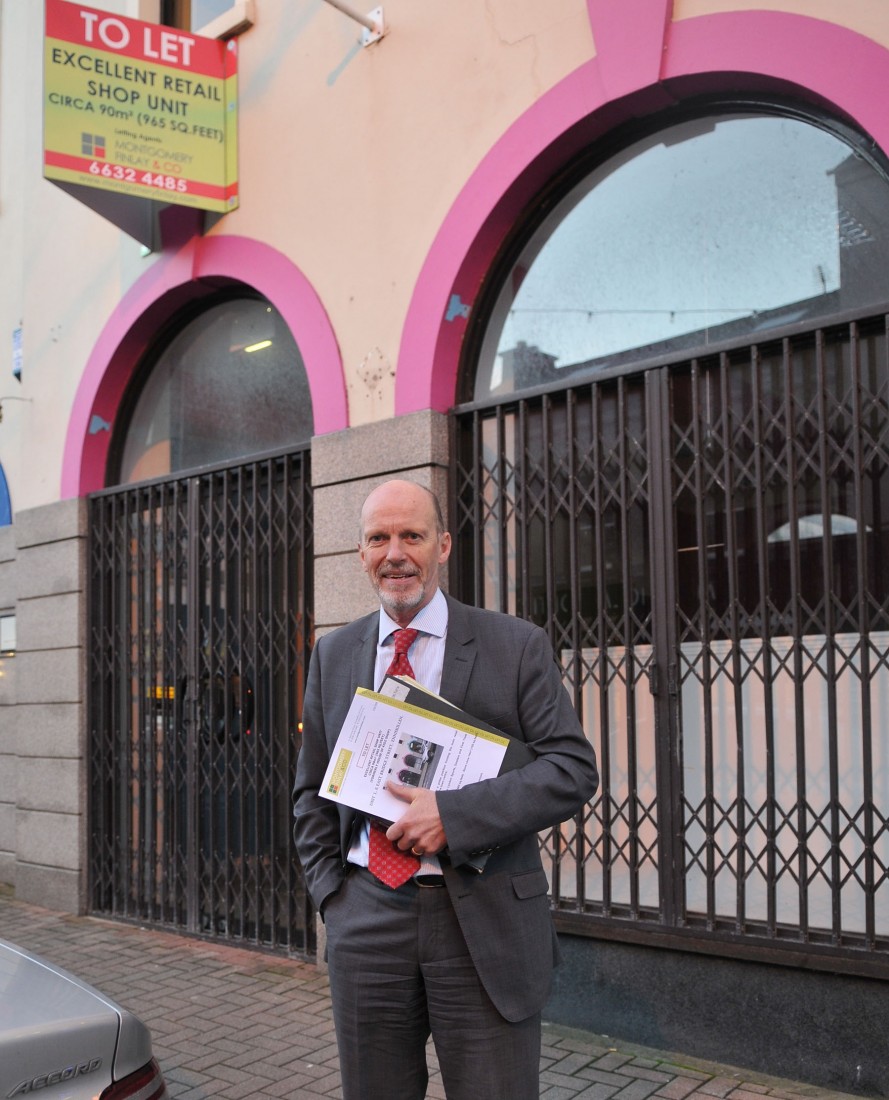 Terry Finlay pictured outside one of the empty shops

ENNISKILLEN town centre is faring better than most, according to a new survey on commercial  property across the North.

The survey of the retail property market took in seventeen towns across the North and claimed that in Enniskillen only  11.0% of shops lie vacant – down 5.8% on last year and comparing favourably with the average of 19% across the North.

Commenting on the figures,Terry Finlay, a partner in Montgomery Finlay & Co, said: “Landlords have been adjusting their rents to try and accommodate tenants to keep businesses open.

“I know landlords get a bad press in England, but most of the people I work with are trying to do their best because, obviously, when properties become vacant, landlords have rates and things to cope with, so they are very keen to keep tenants in place.”

The commercial property report, somewhat surprisingly, revealed that some towns which would be regarded as ‘shopping towns’, showed an increase in vacant commercial premises.

One of them is on the books of Eadie McFarland & Co.

William McFarland, a director, suggested that, whilst commercial space vacancy levels may be slightly lower in Enniskillen than other towns, this may only be due to higher numbers of owner occupiers and southern trade.

“We cannot be complacent.

“There is still a lot of vacant space in Enniskillen, and possibly more to come. One factor leading to traders closing and others failing to open is the high rates bills.

“When prospective tenants look at units with us, the first question they ask is: “how much are the rates?”. They know that they can negotiate the rent but not the rates.”

He said one premises was let at £42,000 per annum until 2010. It was then vacant for nearly three years, during which the landlord had to pay £8,435 per annum in vacant rates.

“Now, it is let at only £15,600 per annum, and the rates payable are £16,870 per annum. If rates don’t decrease, more businesses will close and unemployment will rise.”

He explained that, as a rule of thumb, business rates payable were traditionally around 50% of the rental value.
However, as rents have fallen since 2007, rates have only increased to a point where they are often now as high or higher than the rent.

Mr McFarland suggested that a commercial revaluation by Land & Property Services in 2015 would only redistribute the burden in that the same rates bill would be collected.

“Surely government must consider an alternative way to fund council services rather than the great burden which extortionate rate bills put on businesses.

“Businesses have enough pressures with tough economic trading conditions and ever-increasing new legislation thrust upon them.

“One has to ask what our political representatives are doing to help businesses?