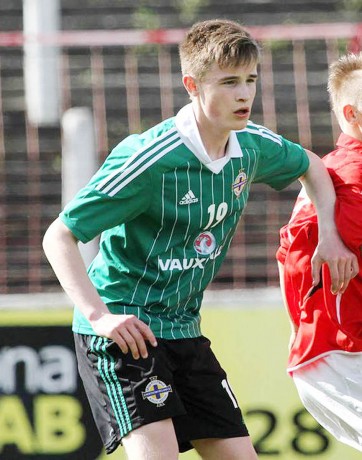 Ballinamallard Youth defender Matthew Smyth shone for Northern Ireland Schoolboys on Friday night as they overcame the mighty England with a 1-0 victory in the Victory Shield.

Matty played the whole game in the centre of defence for Northern Ireland as they kept a clean sheet and scored the vital goal in the second half.

The game ended with concern over suspected broken legs to two players, one in each team.

A tremendous achievement though for Matty who played his part in a well deserved and extremely rare win for Northern Ireland against England at U16 level.

Already this year the Under 16 team has won in Belgium and Finland.  Next week manager Desi Curry takes his young squad to Wales for their final Victory Shield match at Bangor City.

“A win will not guarantee us the championship as we would need England and Scotland to draw their game for us to win the title outright but it would certainly put the pressure on them. We will travel with high hopes and I know that everyone is looking forward to the game. If the boys can reproduce the skill and determination that they have shown in all the previous away game I believe that we can pull off another victory,” added Curry.