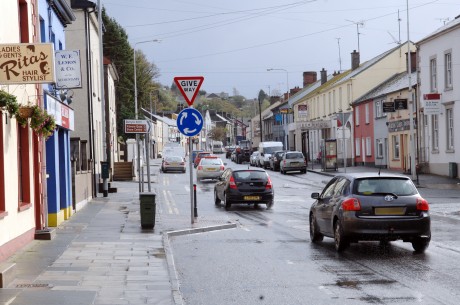 LOCAL traders in Lisnaskea, Derrylin and Irvinestown are fighting to survive, but so far remain afloat, thanks to a combination of good promotion, new ideas and good old fashioned hard work.

In the wake of recent high profile shop closures in Enniskillen the Herald spoke to business owners throughout the county who explained the ever growing challenges they face as retailers in rural towns.

Alma Kinnear has been working in Lisnaskea for 10 years and runs the Kissin Crust Cafe. She admitted that retailers in the town are meeting the challenges head on.

Alma notes an increase tourist trade, which she believes has come from the G8 and feels this is only ‘the tip of the iceberg’. Despite these positives there is no escaping the harsh reality of retailing in the current economic climate.

“Of course we would like things to be made easier with overheads, but the fact is it is not going to happen. We have to have as many people as possible coming in. We need people coming in  and places for them to see, places to shop, places to eat. It is about tapping into that we have to work really hard, but that’s what we’re doing.

Ian Kells, managing director of S D Kells, who operate in both Lisnaskea and Irvinestown still sees development despite the downturn.

“We’re OK, but we’re working hard at it and that goes for all our towns not just Enniskillen.”

Raymond McBrien, pictured, of  Nisa Irvinestown admitted that the retailing community in the town has found it difficult for the past seven years.

“We’re doing more work to get less return. We’re working all the time trying to come up with new ideas and promotions and ways to promote the town.

“We do have to work a lot harder, do a lot more promoting, but the people are coming in, they just have less to spend. The customer count isn’t down, they just don’t have the same money to spend.

“People would say to me ‘oh you’re in a great business’ as people have to eat, but if you look at it there are a lot of items people can cut back on. They don’t need to eat fillet steak and they’re cutting back.”

It’s not all doom and gloom though as one prominent retailer has extended his shop.

“Russell Coalter who runs Coalter’s Home and Hardware has extended his premises on Main Street and doubled the size of it.

“We have a good selection of shops, three chemists, a health centre and the Bawnacre, one of the best leisure centres in Fermanagh. There are a lot of things going for it. It is tight and hard work for business, but that’s just the way it is.”

Derrylin auctioneer and valuer Pat Clarke, who also has filling station and shop at Mullyneeny, explained the difficulties that face small businesses like his own.

“Electric costs in small properties is a big thing along with rates. To be truthful if I had to pay rent on top of that I wouldn’t be here, there is no question about that.

“Less people are shopping local. I see the amount of people heading to Asda and Tesco and to be honest I couldn’t blame them for shopping elsewhere as it is cheaper.

“You can’t run them down, every customer is valuable at the minute, you have to look after them and you have to work at your business to keep them.”

He added: “A man said to me recently the new success is surviving and he’s right.”