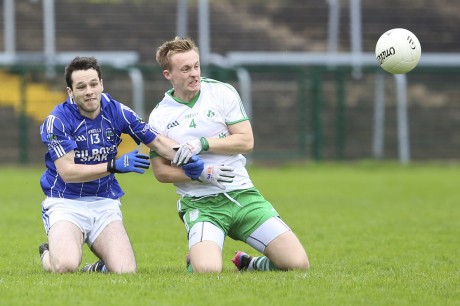 John O’Flanagan and Manus Maguire both slide on their knees as the ball flies away from them.

Tiernach Mahon, the county’s representative on the Ulster Council put it bluntly: “I see it among my own fellows. Brisbane seems to be where the whole of Irvinestown is heading now.”

The problem is particularly acute at under-age level in rural clubs, two of whom, Teemore Shamrocks and Derrylin O’Connells are seeking county bard approval to amalgamate at minor (U-18) next season.

“We haven’t enough minor players to make up a 15-s-side, and it’s important our youth get football, so, rather than not fielding, we have been forced into a situation where young players who need football, can get it.”

Peter Carty, from the Devenish club, the past chairman of the Fermanagh County Board, said it was vital that rural GAA clubs got special attention.

“In my time as county chairman, one rural club had seven players travelling back at weekends from London. That’s not sustainable long term.”

He went on: “There are a number of clubs in the county suffering because of emigration, although we (Devenish GFC) are very fortunate at the present time that some of our lads who have qualified at university have been able to get part-time work locally.

Mr Carty’s preference was to reduce the number per side, from ‘Junior down’, so that clubs would be able to field in their club jersey.

‘It is a problem, and it’s going to continue to get worse because of the decreased numbers in the rural areas. Youth is the backbone and it is very important that youth football is looked at on a county and on a provincial basis.”

Tiernach Mahon said amalgamation, while a possibility, was something he did not want to see happening.

“The club ethos means so much. It’s what the GAA is founded upon.”

He explained that emigration affected his own family.

“There’s my own daughter who’s in Perth and it’s a matter of course all the young ones seem to want to go to Australia and get work and enjoy a good lifestyle. There’s nothing for them here.”

But, despite losing ‘seven or eight’ players to emigration, the Teemore club, according to Padraig Maguire is going strong.

“In an adverse way, it’s knitted the community together and I think a lot of people realise we need  to stick together as a community, and I suppose the GAA is a large part of that.”

He suggested that, while the Quinn situation was ‘unstable’, a lot of the Teemore players were still employed there.

“Thankfully, not a lot have lost their jobs.”