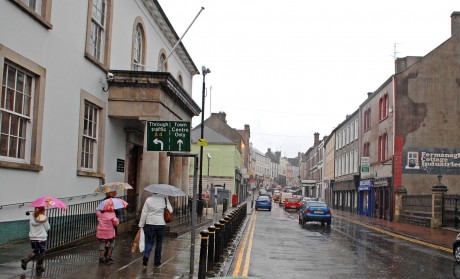 TWO Enniskillen men have been hit with fines totalling £1,700 for fishing out of season on Lough Achork, near Derrgyonnelly, earlier this year.

Romualdas Junevicius, 38 and Romuazdes Bngrumas were charged with impeding an authorised officer and fishing out of season.

Both Junevicius, of Riverside and Bngrumas from The Brooke, pleaded guilty to the offences.

A solicitor for the public prosecution service outlined to the court that on February 23, authorised fishing officers were on patrol in the Lough Achork area – which is closed from November 1 to the end of February by the Department of Culture, Arts and Leisure.

The officers spotted a group of men fishing and were asked if they had the required licence and permit.

One of the defendants, who are both Lithuanians, told the officers that he could not speak English but pointed to his friend who was a short distance away.

As the officers approached two other men to speak with them, an incident ensued and one of the men assaulted an officer.

Both officers returned to their vehicle to contact police.

The group of men were told to remain in the area as police officers were on their way, however all three men got in their car and moved off at high speed.

The officers followed the car and for some time they travelled towards Derrygonnelly, Boho, Belcoo then across the border at Blacklion eventually stopping at Kinlough, Co Leitrim.

When they stopped at Kinlough an off-duty garda spoke to the three men and asked them for a copy of their licence.

They then decided to return to the North where they were stopped by police.

They were charged with the offences and informed their fishing gear would be seized.

It also emerged during court that the man who assaulted the officer has not yet been found.

When one of the defendants was asked by District Judge Nigel Broderick why they decided to fish without a licence, Junevicius replied through a translator: “I can’t speak English so I took it that I could fish at any time.

“I didn’t understand what was being asked by the officers at the time. We left because he (co-accused) told me we had to leave so that’s why we left.”

Junevicius has been living and working in Northern Ireland for approximately 18 months and resides with his wife and five-year-old son in Enniskillen.

District Judge Nigel Broderick ordered Junevicius to pay fines of £200, an offender levy of £15, costs of £960 and court costs of £10.

Father-of-three Bngrumas, who was arraigned on the same charges, incurred a fine of £120 for a late plea and other fines totalling £365.