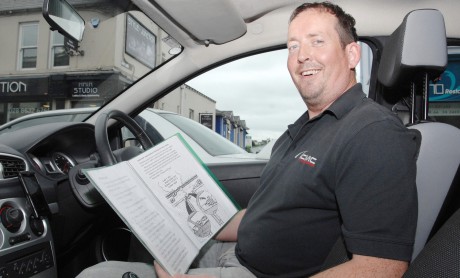 DRIVING instructors across Fermanagh have reported a sharp decline in the amount of learner drivers which has pushed some instructors out of business and left many more struggling.

The rising costs of driving lessons coupled with licence and test fees have been cited as reasons behind the drop in learners drivers on our roads as locals, particularly the young, cannot afford them.

Figures released by the Department of the Environment, which handles licence numbers, shows there has been a drop of almost 17 per cent in the number of people applying for a provisional licence in the last five years from 29,550 in 2008 to 24,692 in 2012/2013.

Within the same period 14% fewer people applied for a full licence while those converting from a provisional licence to a full licence dropped by 18% from 31,831 to 26,095.

The legal minimum age a person can start their driving lessons is 16 but they will have to wait until their 17th birthday before they are allowed to drive unaccompanied.
Enniskillen-based driving instructor Conor McCann blames the rising costs associated with driving for the drop in learner drivers.

He said: “The way the economy is at the minute people don’t have the money to pay for driving lessons.

“The hard times hit and now parents just don’t have the same kind of spare money to pay for children’s driving lessons.

“One parent may be the only one working so they have to prioritise their spending.

“The price of fuel and insurance has increased over the last number of years and people just aren’t able to afford those costs.

“It’s a shame as everyone should have their driving licence.

“A lot of instructors have had to leave the industry or get a second job because there just isn’t the same demand for it.

“The money to buy and maintain a car is colossal and young people just can’t afford that any longer.”

According to research carried out by the Driving Standards Agency, the average person will need at least 47 hours of lessons and 22 hours of private practice before they pass their test.

While the cost of lessons varies, the national average is £24 per lesson which equates to over £1,100 for lessons alone, not including the cost of the theory and practical test as well as the full licence fee.

A Derrylin teenager who is due to start university in September said he is unable to afford lessons but doesn’t see driving as a priority.

The 19-year-old, who doesn’t want to be named, said: “I haven’t applied for my provisional licence because I have no interest in learning to drive because it costs so much to do.

“The whole process seems very expensive from paying for lessons to paying for a new car and insurance.

“I can manage well without a licence as I can walk to work or use public transport too.

“But I know eventually I’ll have get one especially when I’m starting to apply for jobs after I finish university as it will look well on my CV.

“Other costly things will take priority over getting driving lessons like going to university and living away from home.”