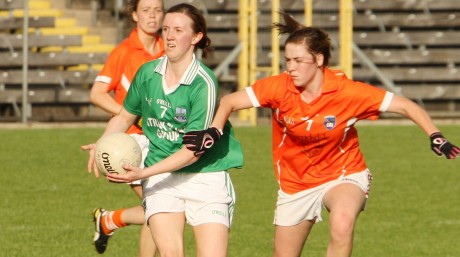 It has been quite a year for Shauna Hamilton.

The Devenish player has caught the eye with some breathtaking performances and none more so than the Ulster final where here tenacious defensive display coupled with dashing attacking surges marked her out as a vital cog in the Fermanagh wheel.

Hamilton started off her county career as a forward with blistering pace and an eye for a score but in recent seasons she has developed into a half back that revels in the high octane pace of the modern game;

“I have enjoyed it. Obviously you have to defend first but the way the game is played now you also have to attack and I love to get forward,” Hamilton revealed, adding;

“And when you do go forward you know that the other girls will have you covered, that players will drop back and help you out.”

Hamilton despite here youth has, like many of the Fermanagh team, been around for many years and gained a wealth of experience but she argues that the influx of younger blood has been a massive boost to the team this season;

“The younger girls have come in and did very well and I think there is a really good mix of youth and experience and we have been going well and the confidence is high.”

Fermanagh have certainly looked good this season in the championship and Hamilton believes that playing in division two in the league is a big reason for that;

“You can’t beat playing at a higher level. We have been playing against senior teams and doing well against them and it has brought on everyone and you can see that in the way we have played in the championship.”

The dashing wing half back explained that ‘there is a great buzz in training and the intensity has been excellent,’ since the Ulster final win over a fancied Down team and Hamilton believes that the common unity of the Fermanagh team has also stood them in good stead.

“We all have the one goal, the one ambition and that really helps in training because we all know why we are there and we all want to improve.”

When asked are the girls thinking of another trip to Croke Park the Devenish star was honest yet also cautious about that particular aspiration;

“Of course we know we are only two games away from Croke Park and an All Ireland final and a lot of us know what it is like to play there in a final and just miss out. And every player wants to play in Croke Park but we also know that we have to take each game as it come and that we have to focus on the next challenge.”

And that next challenge comes in the shape of Roscommon who were beaten by Sligo in the Connacht final but who dispatched Leitrim in the back door to reach the quarter final;

“I don’t know too much about them but at this stage of the year there are going to be no easy games so we are going to have to play well if we want to get through to the semi final.”