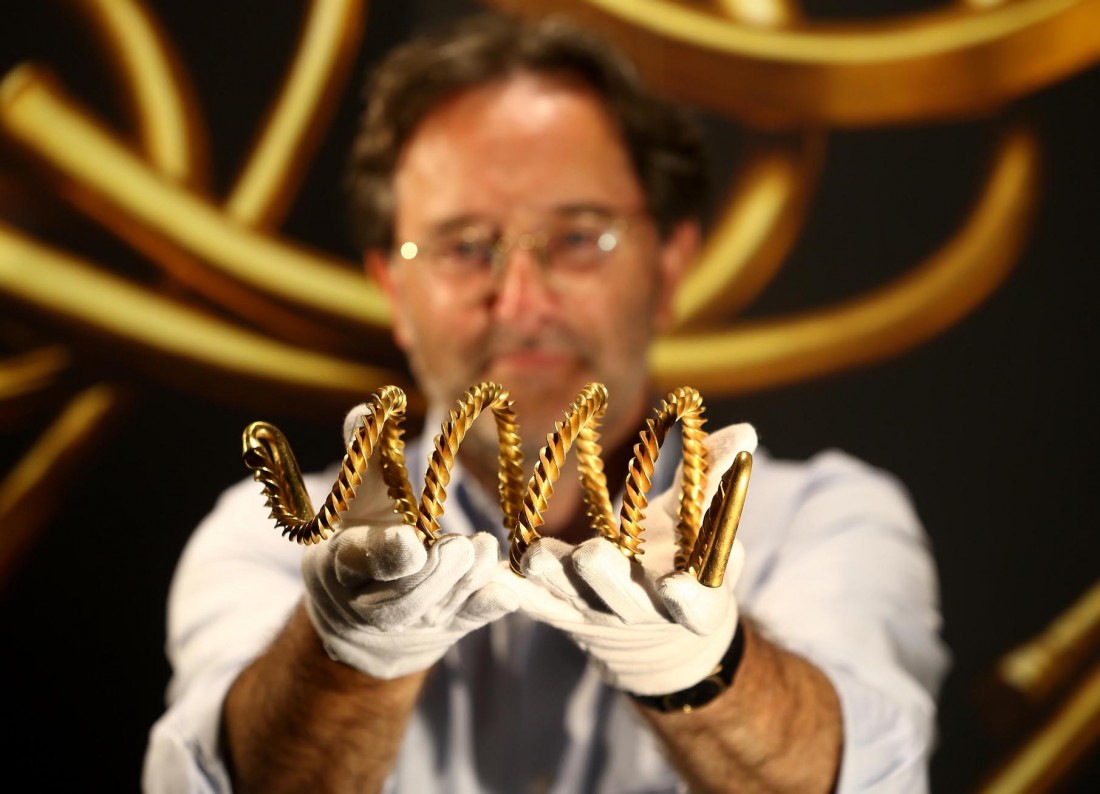 The gold ‘torc’ dug up in bog ground  in the Corrard area of Fermanagh four years ago is the ‘most important single item of prehistoric gold jewellery ever found in Northern Ireland’.

This comes after the ‘torc’, found with a metal detector by Maguiresbridge farmer Ronald Johnston four years ago was finally put on display in the Ulster museum.

Mr Johnston came across the object on December 20, 2009 and the item dates back to c1300-1100BC. Originally found in a coiled shape it created a lot of confusion for the amateur treasure hunter who thought it was a spring from a car.

The torc was acquired by National Museums Northern Ireland following a Treasure Inquest heard before the Coroner’s court in Belfast.

In its present condition the torc could not be worn as it has been deliberately coiled, appearing rather like a large spring. However, the torc was originally designed to form a large circular hoop with two solid terminals at either end. These are believed to have acted as interlocking clasps to allow the torc to be fastened and unfastened, rather like a clasp on a necklace or the buckle of a belt.

The main body of the torc has a narrow twisted ribbon-like appearance and it is this skilful twisting by the goldsmith that gives the object its name – a ‘torc’ – from the Latin ‘to twist’. Experts cannot be certain on what part of the body they were worn. Those of a smaller size could have been used as a necklace with larger examples worn around the waist, which would have fitted around a 47 inch waist .

The reason for changing the shape of the torc from a circular hoop into what now looks like a coiled spring remains a mystery. Some suggest it was buried when the owner died and the coiling was a type of ‘decommissioning’ so that it could no longer be worn. Alternatively, it could have been an offering to the gods. This fits in with a pattern in the Bronze Age where some of the finest bronze and gold objects appear to be deliberately buried in wet locations like bogs, rather than being accidentally lost.

Dr Jim McGreevy, Director of Collections and Interpretation at National Museums Northern Ireland, said the torc is a stunning addition to the museum’s Bronze Age collection.

“We are delighted that this beautiful piece of ancient jewellery, of which there are only nine other examples from Ireland, can now be enjoyed by visitors to the Ulster Museum.  It is an item of great archaeological significance and epitomises the supreme skill of the goldsmith.

Greer Ramsey, curator with National Museums Northern Ireland called the piece the ‘most important single item of prehistoric gold jewellery ever found in Northern Ireland’ and added: “ It’s a stunning find and really is a beautiful object.”

The torc can now be found in the Early Peoples gallery of the Ulster Museum.