Advertisement
HomeHeadlineFear and loathing as marching season gets underway
Advertisement 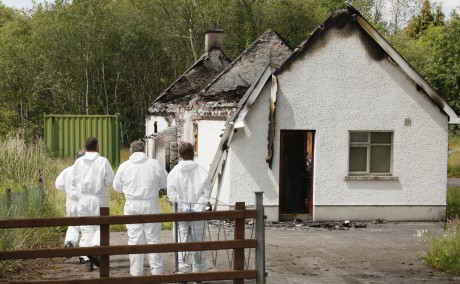 WHILE Protestant communities across the North look forward to the parading season, for the small unionist community tucked in the heart of east Fermanagh it can often be a time of fear and apprehension.

Some say that the marching season in July can be a time marred by attacks on Orange Halls and intimidation from protesters who often line the streets as the parade makes its way through Newtownbutler.

A few of those taking part in the march say the fear instilled in them as the 60 strong crowd gathers to voice their opposition has left them questioning the rules set by the Parades Commission.

The Inver Orange Hall has been the centre of numerous attacks over the years.

It is currently in its final stages of renovation after it was destroyed in an arson attack two years ago.

One Protestant woman who knows only too well the challenges her community faces during the contentious parading season is Esther Andrews who lives in Roslea.

Mrs Andrews, who is married to councillor Harold Andrews, is secretary of Friends of Inver Women’s Group and has been the victim of sectarian attacks.

“You are always looking over your shoulder,” she said.

“At our public events you just don’t know who is there or what is being planned without you ever knowing.

“You are sometimes waiting for something to happen and you feel responsible if someone gets injured.

“There are youngsters around and you are concerned if there’s a strange vehicle or someone we don’t know.

“While I was parading through Newtownbutler I got hit with a Coco-Cola can as we were marching by a crowd of people.

“They shouted abuse telling us we shouldn’t be there because we are from Roslea.

“Things are clearly still in the past with a few people though the vast majority want to move on from those things.

“No one is out to cause offence, this just happens to be where we live and we should be allowed to celebrate and we intend to continue that and we will be law-abiding.

“It can be very intimidating when a crowd of up to 60 people gathers around as some of them can be very vicious and it spoils the evening.

“I would like to be able to have a peaceful and quiet parade this Sunday.”

Following the attack on Inver Orange Hall the women’s group were forced to move their meetings to an alternative hall close to Roslea.

Up to 25 members take part in the get-togethers including a few elderly women.

Mrs Andrews continued: “We did start to use an alternative place in Roslea but young boys were always shouting abuse and kicking the back door and throwing stones at windows.

“The women have never been hurt but it’s very intimidating and left some elderly women shaken.

“These meetings are about getting elderly people out of their homes in the evening to socialise but it’s very off putting with that kind of behaviour going on outside.

“The sad fact is that the newly renovated hall could be burned again but you have to live your life and pass no remarks and ignore the people who do this.”