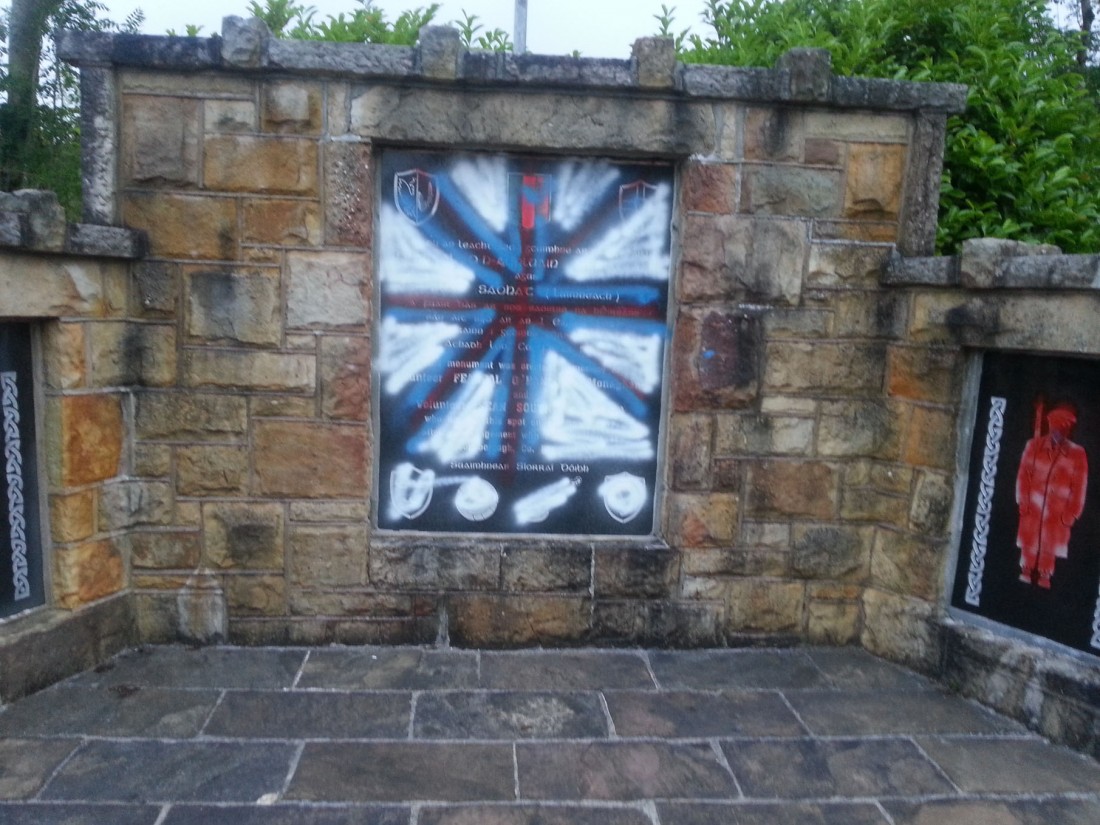 A LOCAL unionist councillor has condemned those responsible for vandalising an IRA memorial in Brookeborough after it was spray-painted.

DUP councillor Paul Robinson appealed to those who attacked the monument on Monday night to cease all sectarian-motivated attacks.

The IRA memorial commemorates two IRA men, Sean South and Fergal O’Hanlon, who were killed on an attack on Brookeborough barracks in 1957.

Part of the inscribed wall was spray-painted red, white and blue in the shape of a Union Jack, as well as red paint sprayed over two adjoining statues.

The large stone memorial, at Altawark crossroads, has been targeted a number of times in the past by vandals.

Cllr Robinson said these attacks do not gain anything: “These attacks shouldn’t happen and I believe it’s all coming from the flag issue but that shouldn’t come into it,” he said.

“These attacks don’t help the situation nor does it gain anything.

“I condemn it outright and would appeal for these kinds of attacks to stop. They don’t solve any problems and it doesn’t gain anything.”

Dubbing it a “pointless attack”, Cllr McCaffrey said the loyalists responsible offered nothing for the community.
“The time has come for local unionist politicians to step up to the plate. They must loudly and openly condemn and disassociate themselves from this type of action,” he said.

“This is a pointless attack which will only serve to further raise tensions.

“It also has the side effect of exposing the bankruptcy of hard-line loyalism. It is clear that this is all they have to offer the community.

“If they fail to do so their lurking in the shadows will be seen as tacit approval.

“The fact is that these vandals are not coming from 100 mile away, they come from within the community.

“I would appeal for people not to retaliate but I can’t guarantee that they won’t do so.

“None of this serves a purpose, it has a danger of cranking tensions especially around the marching season.

“I have lost count as to how many times that monument has been attacked, it’s well into the double figures.”

It is also believed that local republicans will resort to using lengthy security measures to prevent further attacks from happening.

It is not clear as to what measures they will use, however locals say they do not want to keep spending thousands of pounds on fixing the memorial.

Cllr Robinson added that Sinn Fein councillors have to do the same and condemn the attacks on Unionist communities.

He said: “It’s like the Union flag in Fivemiletown which was taken down and burnt.

“No-one from Sinn Fein came out to condemn that, this has to work both ways.

“Both sides of the community are getting attacked so we have to be prepared to condemn both sides.