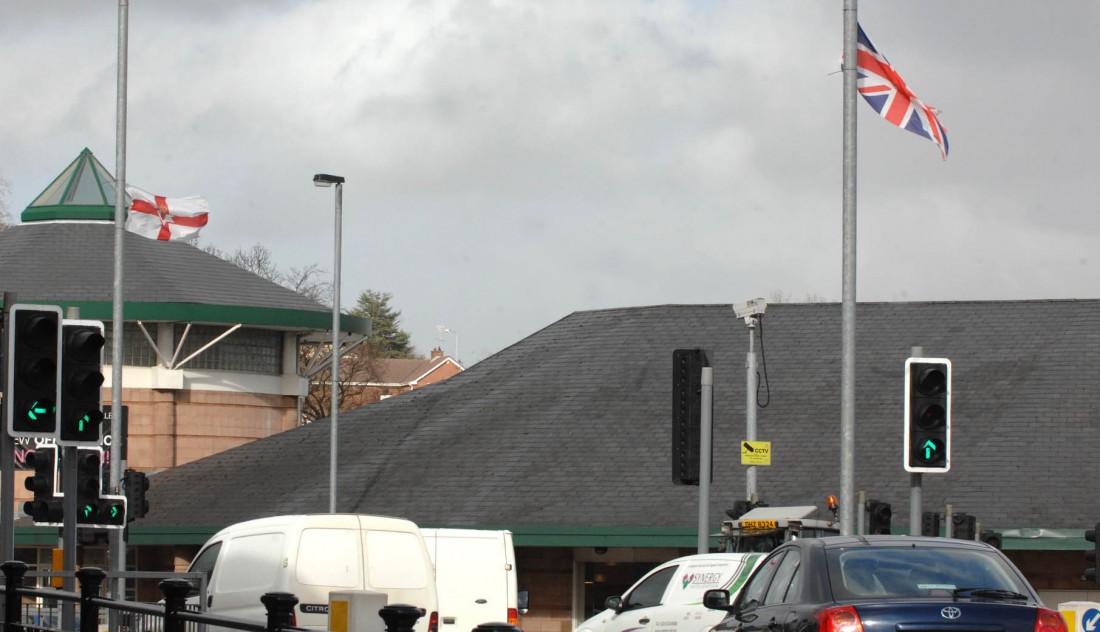 The flags are still flying in Enniskillen

WITH just two weeks until the G8 summit, ‘ragged’ union flags still fly over one of Enniskillen’s main roads – and no solution appears to be in sight.

Local councillors have urged the removal of flags, with the main area of concern believed to be at Gaol Square in Enniskillen.

Though police have said that the removal of flags from poles, which are owned by the Roads Service, is not their responsibility.

Roads Service themselves said that it ‘discourages the unofficial use of any of its property’, and that, should they receive a complaint it will be fully investigated.

Sinn Fein Councillor, Debbie Coyle, said that the flags are ‘very unsightly as you enter the town’, and added: “With the expected crowds coming to Enniskillen during the G8 I would hope that the flags are taken down and all of our visitors, whether here to visit or protest feel comfortable and welcome in our town.”

When asked what the legalities surrounding flags being put on a pole in the first place, and what the police reaction would be if that was seen, the PSNI responded:

“The issue of the flying of flags can be a difficult and sensitive one.

“Police will continue to work with all the interested parties, elected representatives and the community, to support efforts to find solutions.

“We understand that flying flags is a popular way of displaying tradition and culture in Northern Ireland, but for a lot of people it is an emotive issue. We would urge engagement with all the relevant agencies towards finding a resolution.”

Speaking at Monday’s meeting of the council the SDLP’s Frank Britton commended the work going on to improve the image of the town and said that with the unprecedented media coverage there was a ‘once in a lifetime’ opportunity for inward investment, jobs for young people and prosperity for everyone.

And, he appealed for the flags to be removed.

“Thousands of pounds are being spent, now I ask the people who own the flags to join the rest of the county and pack the flags away for now. Let us not parade our differences in front of the world’s media.”

UUP Councillor Robert Irvine echoed Cllr Britton’s sentiments, but said he wouldn’t like the message taken from the flags to be one of a divisive society, but rather one that shows ‘cultural diversity’ and a ‘stable, moving forward society’.

He hoped the message from Fermanagh taken away by the media would be a strength of unity.
“We have diversity, we’re not always in harmony, but we’re very much in unison,” he added.