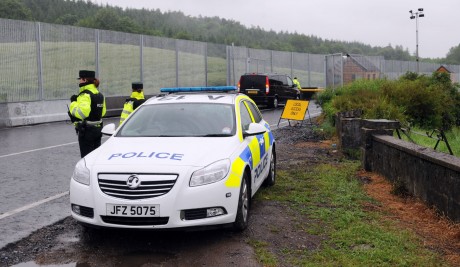 THEY have used  their land to create a ‘road to nowhere’, placed an enormous telephone mast in one of their fields and stationed police at every lane, yet for Linda Moore and her family, life inside the ‘iron curtain’ is relatively stress free.

First told about the plans to put up the fence in February, things could have been much worse for the Moore family.

The neighbouring farm within the exclusion zone, was originally due to be inside the fence.

“They asked how did we feel? And I said that’s appalling the inconvenience of my husband Charlie having to go in and out through the fence to the farm and the possibility of being surrounded by protesters. To me it was the worst possible scenario.”

For the past four months the Moore farm has been a hub of activity, with regular callers at the house and constant traffic on their lane.

Not only has the steel fence had to be erected, but a new seven foot wide road has been put on the land as well as a telephone mast.

For the mast a cable also had to be dug through another part of the land to boost the signal for the summit, meaning further disruption and footfall around the normally tranquil country farm.

“At one time I looked out the window a few weeks ago and in the space of about five minutes I counted ten vans or cars up and down our avenue and it had nothing to do with us, only G8.”

In addition to the disruption, part of the Moore land has been leased out due to the summit, including the farmyard and a cottage, which their son Richard normally lives in, but has since had to move back home.

It is understood however that local landowners in the area will be compensated for the use of their properties.

Despite the bumps in the road though daily life remains fairly normal on the farm according to Linda.

“There has been a certain amount of inconvenience, but because we have been well warned, it is  nothing we can’t deal with. I can’t say we have been stressed at all by it, we have been very, very busy accommodating people and carrying on the farming. The main stress for us has been doing up a few houses on the land.”

The Moore family are free to move as they please in and out of the fence without any major delay, but next week security will be noticeably tightened.

“We are allowed out, but I don’t think we can go out by the Shore Road. That’ll just be for a few days. Rigorous personal and vehicle searching will take place and I don’t think we will bother going out too much, we will get provisions in, sit tight and enjoy the show.”