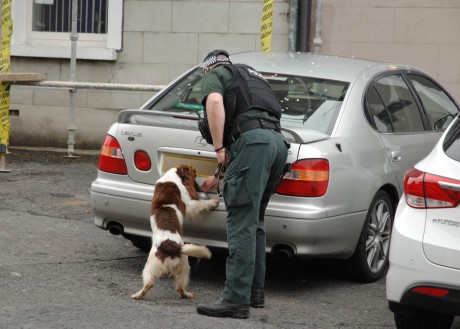 TWO BOMB ALERTS in two days, a ‘likely’ dissident attack and the influx of thousands of GAA  fans from across the border are providing a serious headache for police ahead of the G8 Summit.

Yesterday The Stragowna and Drumroosk Roads in Kinawley were closed after a suspect device was dicovered in the area and due to the seriousness of the threat army bomb disposal experts were called in.

This followed on from Monday when Enniskillen Magistrates Court had to be evacuated after a security alert just after 11am. After a two hour evacuation of nearby premises on East Bridge Street though, the alert was declared a hoax.

Ahead of the summit the security has been increased through the presence of thousands of extra police officers, but Assistant Chief Constable Alastair Finlay has admitted that dissident attacks are ‘likely’.

Mr Finlay said: “I’ve got no reason to say that dissidents won’t do something during that period of time. This is the normal backdrop. This has been the backdrop, the sad reality of Northern Ireland over quite a period of time. People shouldn’t be surprised if there are incidents.”

While in GAA, the news that Brewster Park will host Fermanagh and Cavan in the Ulster Championship may be greeted with excitement from fans, but for police it is just another logistical nightmare, a day before thousands of protesters march in Enniskillen.

Despite reports that the game would be moved or even cancelled  due to the summit, Police superintendent Alwyn Barton said it was not within the PSNI’s remit to ban the game.