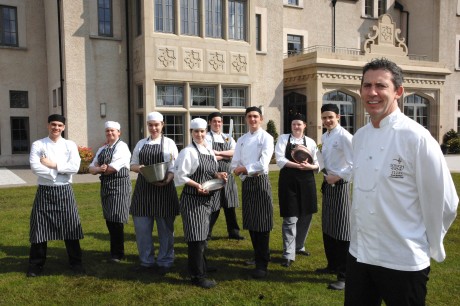 Noel McMeel, Executive Chef at the Lough Erne Resort, pictured with some of his young chefs who will be catering for those at the G8 Summit. They are from left, Timothey Donegan, Lauren Beavers, Antoinette Ceelen, Andrew McKee, Jean Bell, Sam Monaghan, Sinead Morrow and Andrew Leonard gkfh33

LINING his troops outside the Lough Erne Resort’s Catalina Restaurant this week, executive chef, Noel McMeel, of the G8 venue had one message: “We’re going to put on a hell of a show.”

“Some people would say that they’re the ‘Super G-Force’ of the whole resort,” said Noel, speaking of the eight young staff pictured.

“But certainly they are the young people that make this whole property. They are the young chefs that have just come out of College, from the South West College’s campuses and Killybegs College.”

Noel was full of praise for all 32 people he has working within the kitchen area.

“It’s so important as with all the different areas of the resort that we have all the right people. I am always a firm believer that the kitchen, compared to anywhere else, has to be hand-picked.

“For me, and for the kitchen, and for Lough Erne, we look for fully dedicated people who want to buy into the concept of what we have here.

“And that is taking the best of local produce, cooking it as little as possible, with great skill, and serving it to the guest,” he added.

Noel confirmed that he and his staff would be cooking for the eight leaders, as well as a number of delegates.

He described how the best of local produce was to be used.

“We’re very capable, I’ve done a lot of different events like this before. Not as big, but I think it’s so important that we focus on what we’re going to serve them and their guests.”

“We’re here to make sure they have a good time, to showcase the best of Northern Ireland, but most of all, the best of Fermanagh.

“When the curtains open, by God we’re going to put on a hell of a show!”