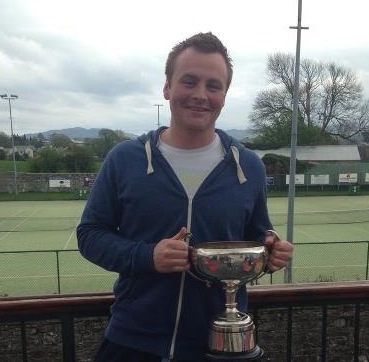 Paul Crilly, who won the West of Ireland ‘b’ championship

FERMANAGH tennis player Paul Crilly came away with the West of Ireland ‘b’ championship, following a tournament over the weekend.

Players from all over Ireland took part in the three-day competition, that started on Friday and finished on Monday.

Paul – who competes with both Irvinestown and Enniskillen – played seven matches, two in the doubles competition, and five in the singles.

He wasn’t seeded in the competition, and came up against the number one seed in the second round.

“I was a bit nervous but I thought that going into that game I’d nothing to lose,” said Paul.

“He was seeded number one, I wasn’t seeded at all. So the pressure was on him.”

“It was a bit of a shock to myself as well as others. But I thought that I was playing very well,” he added.

“It ended up in a tie-break in the final set.

He said that he was ‘over the moon’ with the victory.

“Now that I’m back home I’m playing a lot more tennis. John Maguire (Irvinestown) has got me picking up a racket over the winter months – so I’ve him to thank,” concluded Paul.