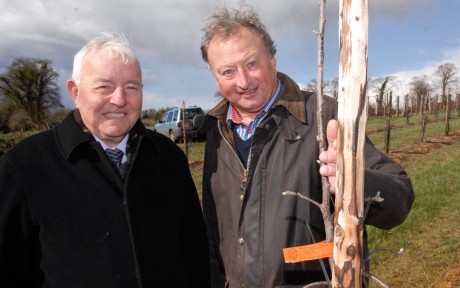 John Brownlee, right, with Eugene Hueston at the opening of John’s new orchard project near Newtownbutler.

WELL-KNOWN television business consultant, Nick Hewer, star of the ‘Farm Fixer’ series, where he advises small farm businesses how to diversify, has given the seal of approval to a number of projects put to him by Newtownbutler husband and wife, John and Ingrid Brownlee.

The Brownlees are well-known for producing Fermanagh Spring Water, and for their Bramley apples but, as they told Mr Hewer, automation is required for their spring water production, and the apple orchard is not sufficiently lucrative.

So, they needed to source other sources of income.

One of their initiatives, individual apple pies, produced on-site, looks to be a ‘go’, thanks to input from Loughry College, a flavoured pet water product is at the prototype stage, and a start has been made by the Brownlees on state-of-the-art B & B accommodation, utilising outbuildings at beside their Kilroot farm dwelling.

This will link in with a new recently-planted forest when it matures, and an on-site fishing lake. Just recently, the couple have planted 25,000 natural trees on their land.
But, that’s not all the Brownlees have up their sleeve.

They invited the Herald to the official ‘opening’ of a 10-acre section of existing orchard which they have re-planted with Dutch-grown, John O’Gold apples.

And, this is what they wanted to talk about.

“We had been looking for an apple with a possibility of a big yield over a very short period of time, 2-3 years, and this is what we came across.

“I have contacts in Holland (where Ingrid, his wife is from), and they told me that John O’Gold apples were more popular in Holland, are less prone to disease and gave a particularly high crop in a very short period of time.”

It’s not without a cost, John estimating it stings him £10 a time for each tree, taking in labour.

But, he is upbeat about the project.

Given his family’s background in fruit processing, in Armagh (Lonsdale Products), John is now hoping that the expected 28 tonnes per acre at Year 5 from his new apples will put himself and Ingrid, a business consultant in a better way of working.

He told the Herald: It’s a great achievement what he’s doing, planting a new orchard. It’s a new venture for him because he never grew this type of apple before. So, I and everyone else who knows John, and Ingrid, wish him well.”