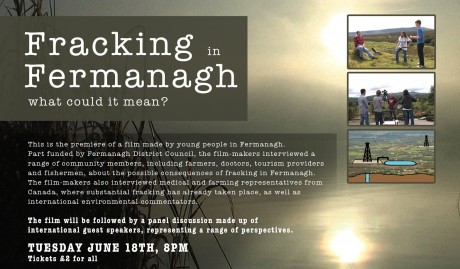 The film is due to be launched in the Ardhowen Theatre

AS PART of their own form of opposition to fracking, one organisation is taking a unique approach to get their views across.

Dr Michael Brown of The Development Media Workshop has been working with 20-25 young people in the county between the ages of 11 and 19 and has trained them in film making so that they can show the impact of and reaction to fracking in Fermanagh.

Dr Brown explained that, as part of the film, his group spoke to a range of  people across Fermanagh: farmers, fishermen, community members, GPs, seeking their views on fracking, particularly what it will mean for the local people.”

He said the workshop would explore the economic argument and whether it will bring jobs  or will it have a detrimental effect and ask the question: whether or not it is possible for farming and fracking to co-exist.

As part of their research, the group also spoke to the Chief Executive of Friends of the Earth, when he visited Fermanagh, as a way of making connections between local and global issues so as to get a local and global perspective.

“We want to give a voice to local people who have been marginalised and disadvantaged in discussion. Very little attention has been given to grassroots who have to live with it.”

Dr Brown then revealed the research had thrown up widespread local dissatisfaction about fracking.

The screening of the young people’s film, part funded by Fermanagh District Council, will take place on Tuesday, June 18 at 8pm in the Ardhowen Theatre. Admission is £2.

The Development Media Workshop is a not-for-profit organisation focusing on social development and environmental issues throughout Ireland, the UK and overseas.