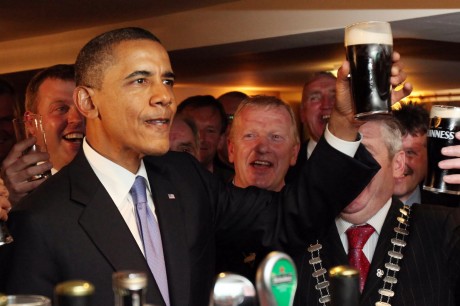 PRESIDENT OF THE UNITED STATES Barack Obama says he is ‘very much looking forward’ to visiting Fermanagh for the G8 Summit in June.

Speaking during the annual St Patrick’s day visit of the First and Deputy First Minister to the White House, Mr Obama explained his excitement at visiting Northern Ireland for the first time.

In a speech to 80 invited guests in Washington, Mr Obama reminisced about his previous visit to the South, and looked ahead to the showpiece June event.

“I’m very much looking forward to visiting Northern Ireland for the G8 Summit this June,” he added.

The G8 Summit will be held on June 17 and June 18, and will be attended by President Obama along with other world leaders.

Prime Minister David Cameron has already said he hopes the summit will be one remembered for brave decisions.

Earlier this year, Mr Cameron said: “I hope that at Lough Erne we can seize this opportunity. At the heart of my agenda for the summit are three issues – advancing trade, ensuring tax compliance and promoting greater transparency.

“All of them are areas where, I believe the G8 can play a distinctive role, using our commitment to open economies, open governments and open societies to support enterprise and deliver economic growth.

“But, to achieve this will require strong political leadership and months of detailed policy work from our teams.”

However, he warned: “This G8 will not be the kind of summit where we simply whip out a chequebook at the 11th hour, pledge some money and call it a success.

“What we are talking about are long-term changes in our countries and the rules that govern the relationships between them.”

In preparation for the G8 Summit, the PSNI are undertaking the biggest policing operation ever witnessed in the North.