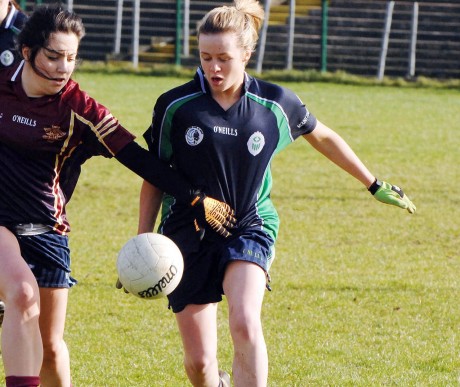 Loreto ladies produced a stunning second half display to deny a brave Mount Lourdes side and take the Ulster U-20 trophy back to Omagh.

Better weather made for a flowing game of football but underfoot conditions were still stamina sapping. Both teams, though, displayed great attitudes in terms of will-to-win, combination play, score-taking and overall work-rate throughout a keenly contested encounter.

The Omagh side’s forwards found their form in the second half but midfielders Emma Collins and Fionnoula Conwell plus the entire defence played their parts well too.

Pre-match, Sinead Donnelly and her Loreto squad mates stood for a poignant minute’s silence in honour of Patsy Donnelly from Dromore who was laid to rest recently.

Loreto created good chances in the first half but a combination of fine goal-keeping from Lourdes custodian Niamh Gillen, some off-key finishing and bad luck prevented the Omagh side from registering more scores.

Keeper Gillen saved at close range to deny the lively Niamh McGirr and a brilliant Niamh O’Neill run led to Siobhan Sheerin’s shot being blocked bearing down on goal.

The holders were turned down with what looked like a legitimate claim for a goal towards the end of the first half after good work from Cara McCrossan. Referee Paul Swift consulted with the umpires who expressed conflicting views on whether the ball crossed the line or not and no goal was given.

Lourdes counter-attacked after this let-off and won a penalty that Sarah McCausland converted shortly before the interval whistle sounded.

Player-of-the-match recipient McCausland contributed all five first half points(3f) for Mount Lourdes alongside her spot-kick strike.
At the opposite end, Kerry McGarvey, Fionnoula Conwell and Niamh O’Neill(free) scored for a Loreto team that now needed to pick up the tempo at 1-5 to 0-3 down.

Loreto turned around keen to give everything in the quest for Ulster success and they started sharply with a brace of McGarvey points prior to Aine McManus firing over in reply.

The Omagh side quickly returned to attacking mode as McGirr pointed and then Siobhan Sheerin supplied a timely goal finish to level the scoreboard up on 40 minutes.

O’Neill and McCausland swapped place kicks before Conwell hoisted over a fine score for Loreto ahead of another McCausland free.

Emma Smyth edged Loreto in front and then Niamh McGirr found the net after her first effort hit the post. The holders were now 2-9 to 1-8 ahead on 47 minutes.

McGirr followed her goal with a well-taken point, O’Neill, Conwell and McGarvey tagging on closing scores as the Omagh side wrapped up victory.