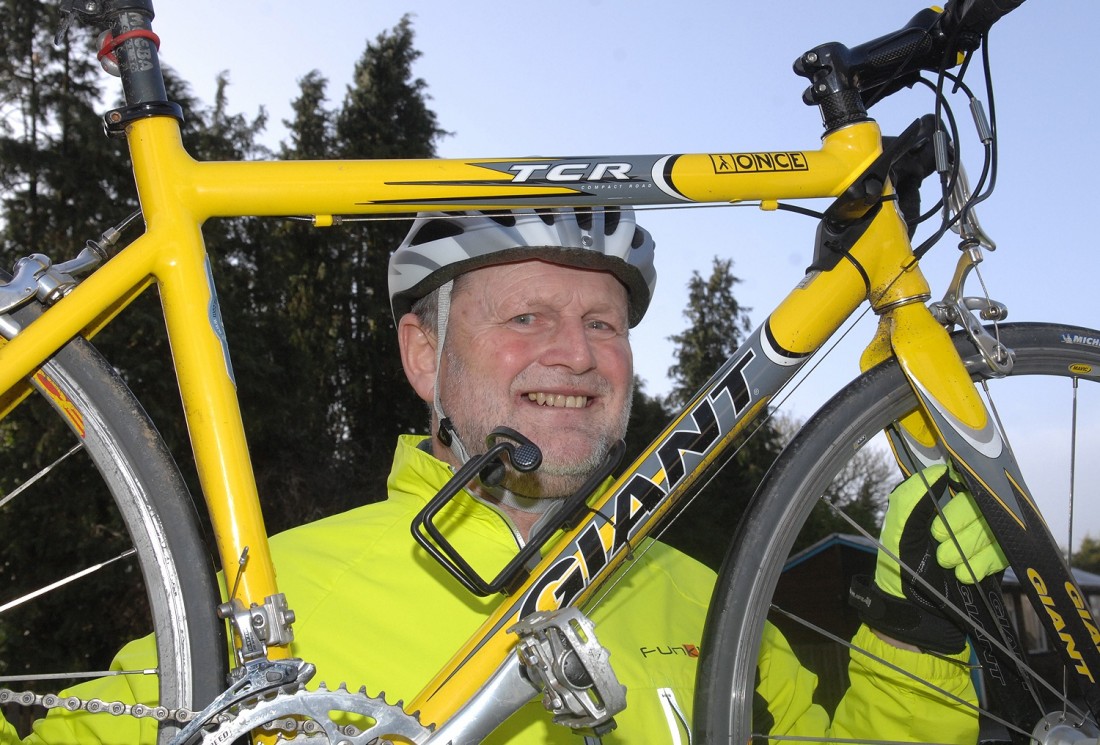 Jonathan Isherwood is looking forward to his sponsored Cycle

FOR most 68-year-olds the thought of embarking on a 400 mile cycle would be something they would not dare attempt in their wildest dreams, but Springfield man Jonathan Isherwood is not your average pensioner.

In May Jonathan will saddle up for a mammoth 427 mile week-long cycle across Ireland, cycling from Mizen to Malin Head. Although a daunting prospect for most, Jonathan has a wealth of experience from endurance events that include nine marathons in Dublin, Belfast, London , Derry and Moscow, a Belfast to Dublin Maracycle and a Liffey Canoe race, which stretched over 16 miles.

By cycling from Ireland’s most northern point to its southern most point Jonathan will be raising money for Marie Curie, but as well as from providing much needed funds for the cancer charity, the Springfield man is keen to test himself almost 30 years after his last endurance examination.

“ I first read about the cycle in a newspaper and it seemed hugely worthwhile.
“I like endurance events and  this man in the paper said it was a great week so I read a bit more about it and I realised that it’s only seven days so it’s broken down to 60 miles a day, 30 in the morning and 30 in the afternoon, with breaks every 15 miles. So I thought I’m up for this, I know I’m 68 and people will be saying I need to catch myself on cycling from Mizen to Malin Head, but I’m looking forward to giving it a go.”

Asked whether he was worried about taking to the road again 30 years after his last endurance challenge, Jonathan was more excited than anxious.

“It is not a race, we take general breaks and have to take a compulsory stop for lunch. It is endurance yes, but maybe that should be my middle name. It has been light years since my last endurance cycle, but I think it is broken down into manageable distances , which makes it easier. I’m also hoping my marathon experience will stand me in good stead.

“I’m definitely up to the challenge. The years have gone past, but in some ways that may be to my betterment as  I know how to pace myself. Getting my backside conditioned is the only problem I can see.”

Ahead of the cycle in May Jonathan is already in the process of training and is gradually building up his efforts in preparation.

“Well at the minute I do about three days in the gym and burn 1000 calories each time, mostly on the bike. I also like to get out cycling on the roads two days a week if I can.

“Nearer the time I will be doing 100 mile cycles in training in one day and that is followed by 15 to 20 miles the next day to get yourself used to it after a long day in the saddle. It’s all part of the preparation.”

Even though the race is not until May, the regulations of the charity cycle state that Jonathan must raise  at least £1,000 before the end of February in order to take part.

You can help Jonathan raise money for Marie Curie without leaving your own home by going online to www.justgiving.com/Jonathan-Isherwood and following the on screen instructions.

“Just having the privilege to be able to do this, enjoy it and help other people is massive to me. I’m a humanist, I just love helping people.

“If you can stretch to a few quid or more, I’ll do the rest. Together we can make quite a difference, because life really is too short,” added Jonathan.