THERE has been shock and sadness across Fermanagh this week at news of the passing of Coonian priest Mgr Richard (Dick) Mohan, former prior of Lough Derg.
Mgr Mohan passed away at the South West Acute Hospital on Sunday, following a very short illness, leaving the parish of Clones – where he served as parish priest after leaving Lough Derg – and communities across Fermanagh in mourning.
His funeral Mass took place yesterday (Wednesday) at the Sacred Heart Church in Clones, after which Mgr Mohan was brought to his native Coonian for burial at St Joseph’s Cemetery.
Bishop Larry Duffy has led tributes to Mgr Mohan, stating his death had “come as a great shock to myself and to all who knew him, especially his family, the parishioners of Clones and the diocese of Clogher.”
“Throughout his priestly ministry, he gave great service to people of all ages and in various places,” said Bishop Duffy.
“He was a very competent catechist who is remembered with great fondness by the many people with whom he came in contact through his 12 years working in our primary schools as Diocesan Religious Advisor.
“His time at Lough Derg was a period of development and change, and being a man of vision and openness to the Lord, he managed that well.
“Above all, Fr Dick was a priest whose priesthood was rooted in walking with Christ every day. He fulfilled that ministry of Christ’s love right up to the final hours of his life.
“May the Lord now grant him eternal peace in the fullness of God’s Kingdom.“
Having first served as parish priest on Lough Derg from 1974, Mgr Mohan was prior from 1990 until 2013. He left a lasting legacy and has been credited with modernising the holy island pilgrimage site.
In a statement, a spokesman for Lough Derg said Mgr Mohan would be “fondly remembered by thousands of Lough Derg pilgrims from all over the island of Ireland and beyond.”
“His legacy will live on at Lough Derg, not only in the development of the fabric of the island, but also and perhaps, more so, in the friendships made with staff and pilgrims and in the great pastoral support that he is renowned for,” they said.
“We extend our deepest sympathies to Father Mohan’s family and friends and all who mourn him. May his soul rest in eternal peace.”
Before taking up his role as parish priest on Lough Derg in the early 70s, GAA fan Mgr Mohan was a member of his local club, Brookeborough Heber MacMahons.
The club issued a short statement upon learning of Mgr Mahon’s passing, “The club were deeply saddened to hear of the death Fr Richard Mohan. He represented the club as a player and was a member of the 1971 team. He continued to support the club after his playing career ended.
“We extend our deepest sympathies to his brother Pat, sisters Mary, Anna and all his extended family.” 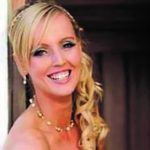 Belleek woman Tanya ‘was beautiful inside and out’